5 from 17 votes
Jump to Recipe 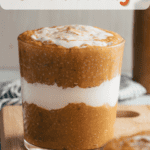 I’ve never really been a fan of chia seed pudding…in theory! You see, I had never actually braved the “slimy” little chia seeds – or at least what I assumed were slimy little seeds until I was at a restaurant one night CRAVING for dessert and the only vegan option on the menu was chia seed pudding. So I forced myself to give it a try- even if I had to choke it down!

And just like Sam I Am with his green eggs and (vegan) ham, I was shocked to find that I actually liked chia seed pudding! No weird sliminess at all! In fact, the texture reminded me a little bit of tapioca pudding – which I’m definitely a fan of.

So I had to get busy developing my own chia puddings like my tropical and delightful Mango Chia Pudding!

Why you will love this pumpkin chia pudding recipe

If you crave the flavors of pumpkin pie, spice, and everything nice, then I think you’ll really love this pumpkin chia pudding too. It is:

How to make pumpkin chia pudding

Make sure that the cinnamon is fully incorporated. Powdery, dry, ground cinnamon sometimes takes an extra strong couple of whisks to fully blend in.

At this point, I give my pumpkin pudding mixture a little taste and decide if I want to add more sweetener or not. This pumpkin chia pudding recipe is not terribly sweet as written. If you have a sweet tooth or are making this recipe for a child then you will most certainly want to add in some more sweetener.

If you decide you’d like to add more sweetener, do NOT add more liquid sweetener or you risk making the pumpkin pudding too runny. I usually add some coconut sugar to taste. Remember, you can always add more, but it’s really hard to take an overly sweet taste away.

If you don’t want to add more calories to your pumpkin pudding mixture then you can use monk fruit or another similar low/no cal sweetener. Start with a small amount and then add more to taste.

Stir in the chia seeds, making sure they are all well mixed in and dispersed throughout the pumpkin mixture.

Refrigerate and allow to sit for 30 minutes while the chia seed coating develops a gel-like consistency that will thicken the pudding. This chia seed pudding will not be as thick as traditional puddings are, but you’d be surprised just what the mighty (tiny) chia seed can do for your pumpkin mixture!

You will be using four small containers or small glass jars that are about 3/4 cups each in volume. If you are a fan of the Oui yogurt with its cute glass jars (which are the perfect size), you might have a drawer full of them like I do! You can even buy lids on Amazon to fit the small glass containers.

Any small glass jar or glass will do. Today I used some small juice glasses I had in my cupboard.

Start by layering a scant 1/4 cup of chia pudding in the bottom of each container. Spoon in a layer of yogurt followed by another layer of pumpkin chia seed pudding. Top with more yogurt and a sprinkling of cinnamon.

You can eat this yummy pumpkin pudding right away, or cover it and set it in the refrigerator for up to five days. The pudding will thicken slightly on resting. (But again, keep in mind that it will never be as thick as traditional pudding.)

I just made yummy pumpkin spice granola and sprinkled some on top for added texture and a pop of flavor. 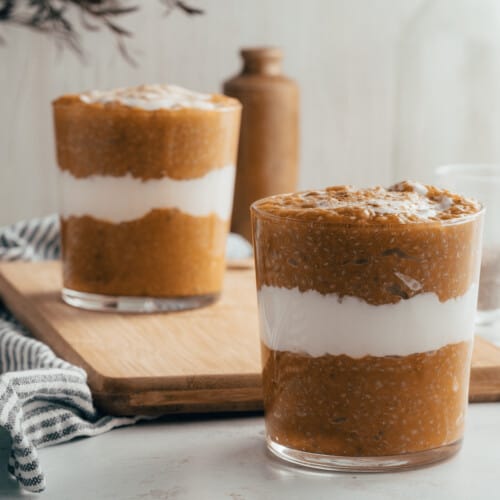 I used white chia seeds in this recipe for the color. You can absolutely use black chia seeds instead. Black chia seeds are more commonly found. I get my white chia seeds on amazon. This recipe does not make a super sweet pumpkin pudding. I recommend tasting it after it’s mixed and before adding the chia seeds. At this point add more sweetener – but NOT liquid sweetener like maple syrup. Add coconut sugar, or even monk fruit or another sweetener.  You can always start by adding a small amount of sweetener, then give it a little taste and add more until it tastes right to you.  If you can’t find pumpkin pie spice in the grocery store, you can make your own pumpkin pie spice or find it on amazon. To keep this recipe plant-based, use any sweetened dairy-free plain or vanilla yogurt of your choice. If it is not sweetened, then you will want to add in a little bit of sweeetener. Sour unsweetened yogurt will not taste good with the pumpkin pudding part. A small 5.3- ounce container of yogurt is only about 1/2 cup. So you will need to purchase two containers so that you have enough for layering and for topping.