5 from 14 votes
Jump to Recipe 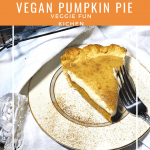 This vegan pumpkin pie is creamy, smooth, and bursting with the traditional pumpkin pie flavor. It’s easy to make because you can use a prepared (vegan-compliant) pie crust and canned pumpkin. This pie has a fancy addition though: a second layer made of cinnamon cashew cream. 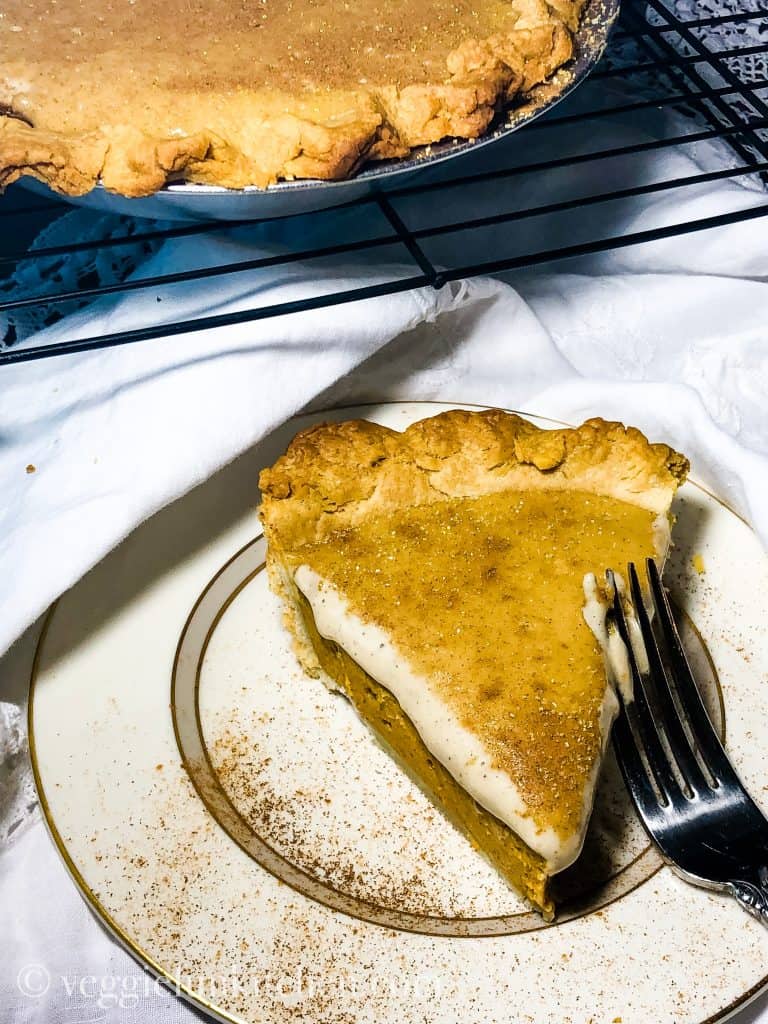 I remember my first vegan Thanksgiving. I made it my goal to make all the yummy  traditional sides and desserts my way – the vegan way. (Aren’t the sides and desserts the best part anyway?!?) Check out this post with all the vegan pumpkin recipes – both sweet and savory – from Veggie Fun Kitchen!

I was so excited to prove that we could still have a traditional seasonal meal and still eat vegan. Most were a success – except for the Watergate Salad (still working on that one), and the pumpkin pie. In fact, I remember my disappointment when I excitedly cut into my soupy goopy vegan pumpkin pie mess- because some things just NEED eggs to help set up! Or do they? I tried the flax “egg” and the aquafaba “egg”, but both were abject failures. 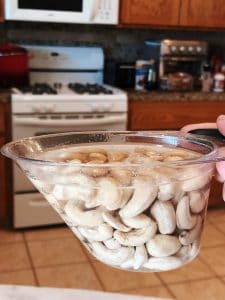 Enter cashews! That’s right – raw, soaked, and ground cashews (affiliate link) can be a great thickener and stabilizer for many dishes in which eggs are traditionally used. I first discovered this when developing my Puff Pastry Apple Cranberry Strudel. As it turns out, cashews work great for thickening vegan pumpkin pie too! I took it a step further and topped my pie with thick vegan cinnamon cashew cream. Yes, there is vegan whipped topping somewhere out there on the market. Unfortunately, though, the vegan whipped topping is usually full of oil; and may not be available to those of us living in a small one-grocery-store town…

The cinnamon cashew cream used in this recipe is not a “light and fluffy” type of topping but more of a second layer to the pie. It adds a subtle nutty flavor and is the perfect topping for this pie.

PLEASE! YOU MUST DISCLOSE TO ANYONE EATING THIS PIE THAT IT CONTAINS NUTS! Nuts are not a common ingredient found in pumpkin pie. A person with allergies might not be aware if you do not fully disclose. Never try to pass vegan cooking off as non-vegan  – especially if the item contains potential allergens.

Start by preheating your oven to 375° and soaking the raw cashews (affiliate link) for about 30 minutes. If you can only find roasted cashews then you will need to add hours to your soaking time and rinse well to remove the added salt.

I use a prepared pie crust. Feel free to make your own. There are many recipes for a more “plant-based” crust – but for a special seasonal meal, I prefer the traditional type of crust. Just read the 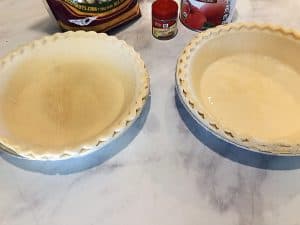 ingredients to ensure the crust fits in with your way of eating.

Set the crust, if frozen,  on the counter to thaw while you are preparing the filling.

One trick I learned from my mamma to make your store-bought crust appear more homemade, is to pinch or flute the thawed edges like you would if you made the crust yourself. Tricky tricky. 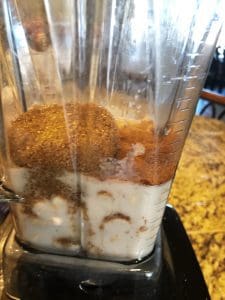 Make sure to drain the water off from the soaked cashews. Add to a high-speed blender  (affiliate link) along with the other pie ingredients and mix on high for 3-5 minutes or until cashews are thoroughly blended and the mixture is smooth. Make sure to buy SOLID pumpkin NOT the pumpkin pie mix. That has other ingredients in it and your recipe will not turn out the same.

Pour and scrape the pumpkin pie mixture into two prepared unbaked crusts. Spread evenly with a spatula. I used an eight inch deep dish shell for my pies. Depending on the size of the pie shell, the pie mixture may not come to the top. Remember, you will put a second layer of cinnamon cashew cream on top after it’s baked and cooled. 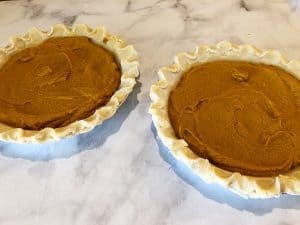 While the pies are baking, begin making the cashew cream. Start, of course, by soaking the cashews for about 30 minutes. While they are soaking you can wash your high speed blender. You know the trick for that right? If not, then enjoy this quick little video from Raw Blend.

Drain the cashews and add to your clean blender along with the other ingredients. Pour into a jar or container and put in the refrigerator or just set aside while the pies are finishing cooking and cooling.

After 50-55 minutes the pies should be done. The traditional “knife test” is not going to work for this 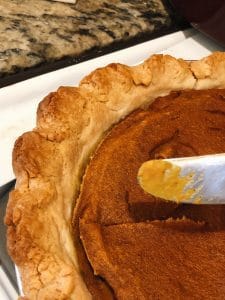 recipe. The top will be darker and there might be some cracks on top. When you give it a gentle wiggle, it will be mostly firm-ish. The pies will firm a little more as they are cooling. Set on a cooling rack to cool. When you can handle touching the pans, you can put into the refrigerator. 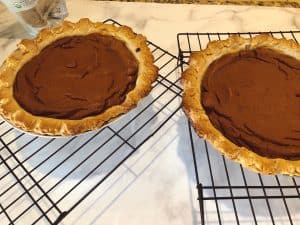 Should these pies be served cold or warm? I’m a cold-pie gal so for me there is no question. I did a little survey on my Facebook page and was surprised to learn that more people than I would have guessed liked pumpkin pie warm. Eww. Especially as these pies do set up better when they are cold, I suggest serving cold. If you are a die-hard warm pie person, then go ahead and serve warm but be aware the pies will not be as firm. I would not, however reheat the pies with the cashew cream on top. Personal preference I guess…

Once the pies have cooled sufficiently, pour the cashew cream on top and carefully spread. Sprinkle with a little cinnamon and sparkly sugar if desired. 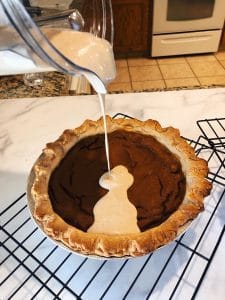 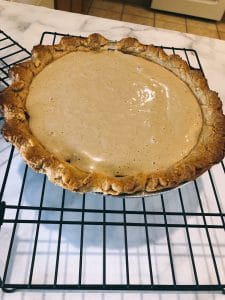 These are some items I used when making this recipe (affiliate links): 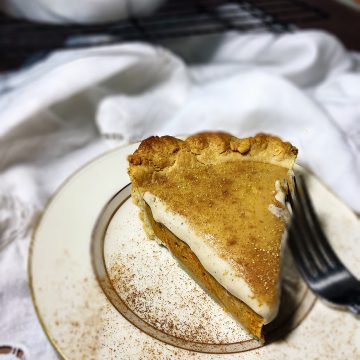 Blend in a high speed blender until smooth.

You must disclose to anyone who may eat  this pie that the recipe contains nuts.  Pumpkin pie typically does not contain nuts so this is especially important.