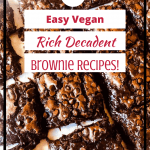 Brownies are meant to be tasty and uncomplicated. Right? But sometimes they aren’t – especially when they are vegan brownies…until you know the secrets! Read on to learn more about the best easy vegan brownie recipes from Veggie Fun Kitchen! 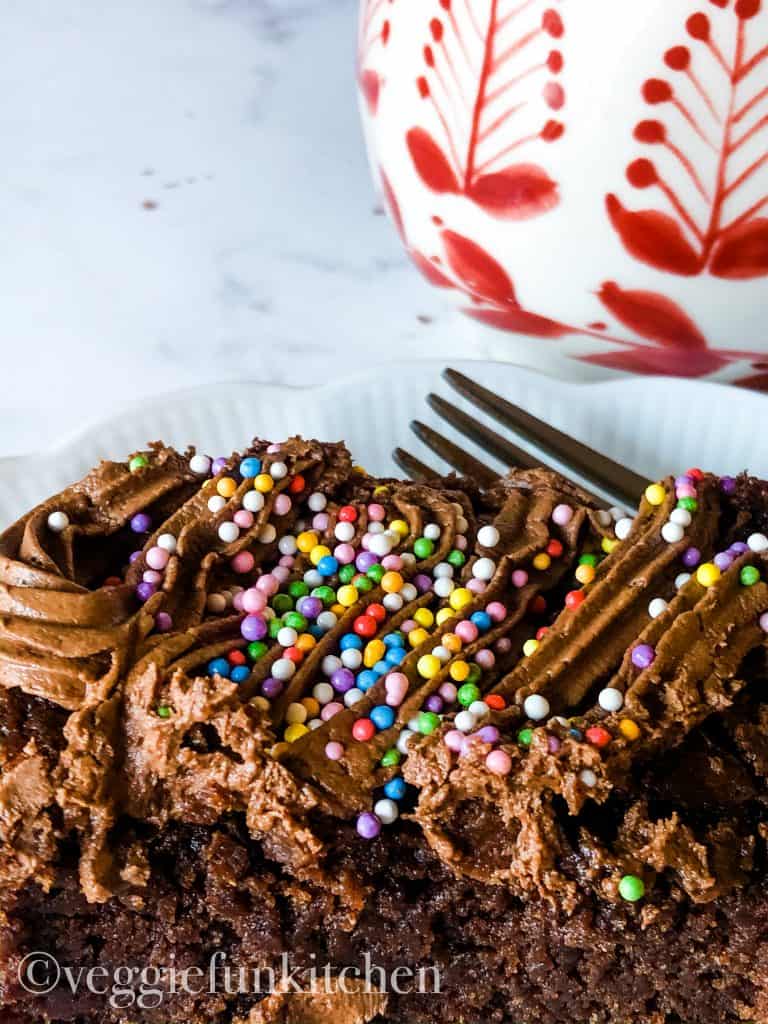 When I first started making vegan brownies, I’ll admit it was a bit of a trial and error process. The first few times I made them, they absolutely fell apart! Or they were mushy in the middle and rock-hard on the outsides! I didn’t understand how to substitute ingredients for some of the typical animal products that had worked for me in the past.

After many (delicious – and not so delicious) attempts, I finally broke the vegan brownie code of ingredient substitutions. I’m happy to share with you all the details and best recipes so that you too can be successful in making delicious, decadent, chocolate vegan brownies! 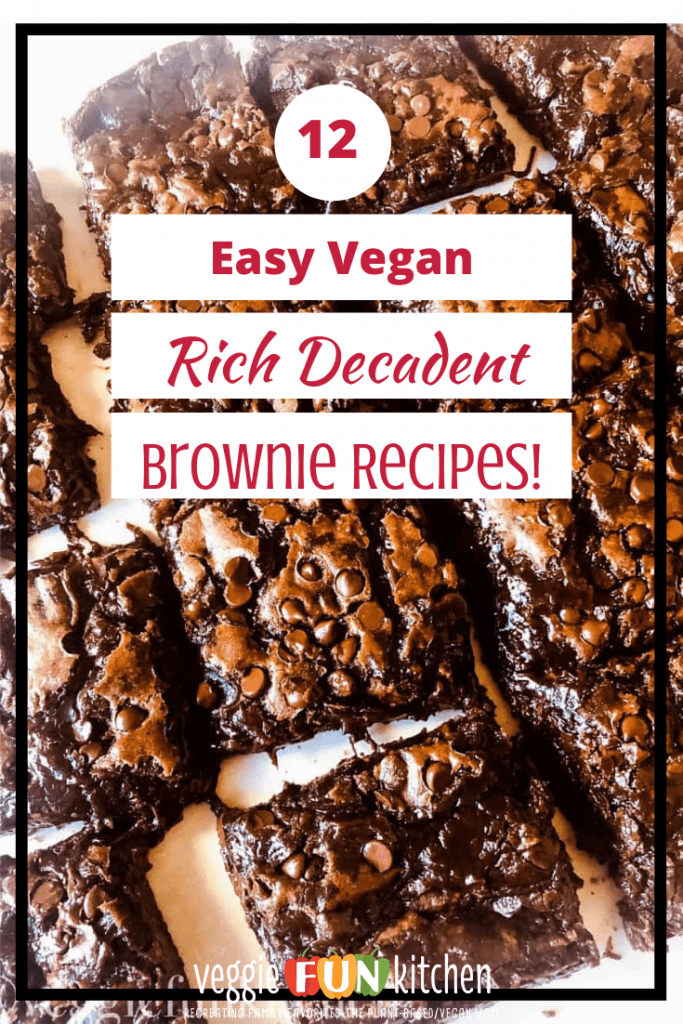 Replacing the dairy in vegan brownies:

With all the great dairy-free replacement options available commercially, replacing the dairy in brownies is easy!

I prefer to use vegan butter sticks as opposed to tubs of vegan butter. The fat content is closer to that of dairy butter. My current favorite is  Country Crock Plant Butter. I also like Myoko’s Vegan Butter but I find it harder to source in my area.

When replacing the dairy milk, I honestly use whatever unsweetened plant milk I have on hand. It is usually either cashew, almond, or oat milk. And I am not particular about the brand. Just make sure to use unsweetened and plain (not vanilla flavor).

Many of my brownie recipes use sour milk to help with the leavening (rising). I use this same hack I learned when I was a little girl. You see, buying a whole carton of buttermilk only to use a small portion for the baked goods we were making would have been an unheard-of expense.

My mom simply made her own “buttermilk” by adding either lemon juice or vinegar to the milk and allowing it to sour. Luckily, it works pretty well with plant milk as well! Some of my recipes such as my Mug Brownie and basic Brownie Cake both call for soured plant milk.

Replacing the eggs in vegan brownies:

Ah – now here is where it gets tricky! You can’t just replace chicken eggs with vegan egg substitutes quite as easily as you do the dairy milk. Here are some replacement ideas I’ve used in various brownie recipes:

Most chocolate chips you buy at the grocery store contain dairy. Even some of the dark chocolate chips you might find contain dairy. Since dairy is a common allergen, in many countries, it is a requirement to list it on the ingredient label. You will often find the allergens listed at the bottom or end of the ingredients and sometimes in bold letters. So turn over your package and check.

My favorite brand of vegan chocolate chips is Enjoy Life Semi-Sweet Chocolate Chips. I buy mine on Amazon:

If you are new to vegan baking, you might be confused about references to vegan sugar. Much of the sugar today is processed using bone char. Did you know that? To learn more about it, read this informative article by PETA.

If this goes against your ethics, then source sugar labeled as vegan or use organic sugar which is never processed using animal products. This goes for brown sugar and powdered sugar as well.

Other non-vegan ingredients in brownies to watch out for:

Be aware that some sprinkles are not vegan. It the ingredients contain an item called confectioner’s glaze or shellac, it is made of “bug juices” or secretions. I buy this vegan brand of sprinkles on Amazon all the time. They have some pretty cute sprinkle combos too!

A round-up of the best easy vegan brownies from Veggie Fun Kitchen:

If you are going for pure decadent chocolaty brownie delight, try: 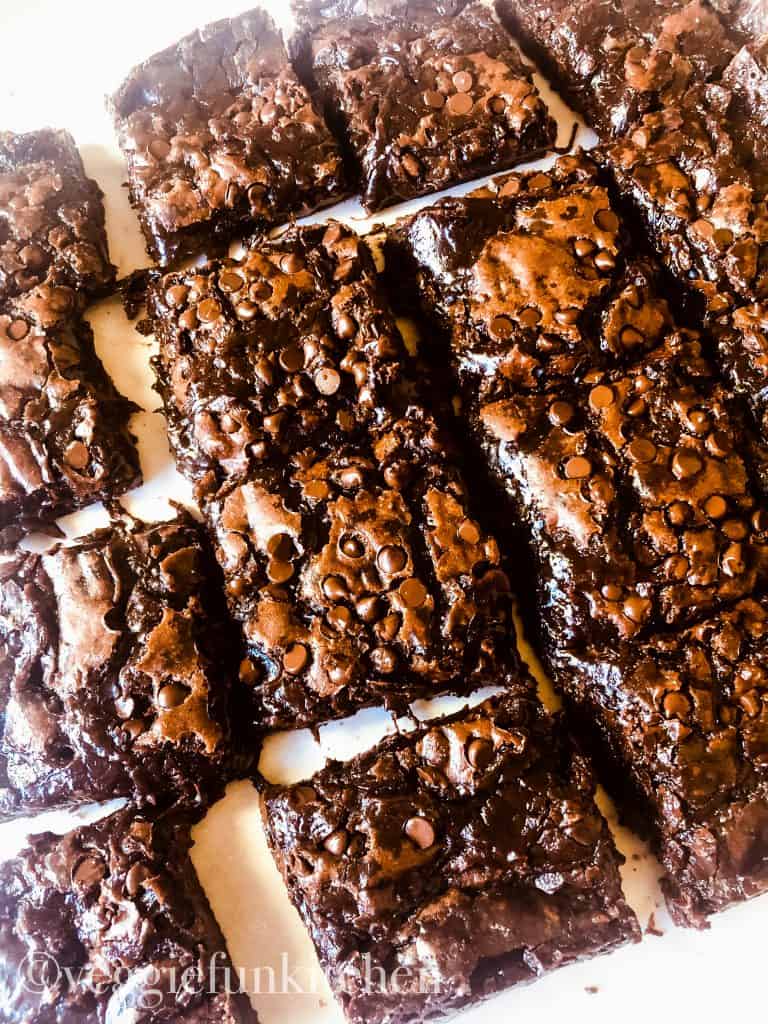 For the healthier brownies, you can’t go wrong with these flavorful yet somehow not so “bad” for you brownies:

And for something a little different try: 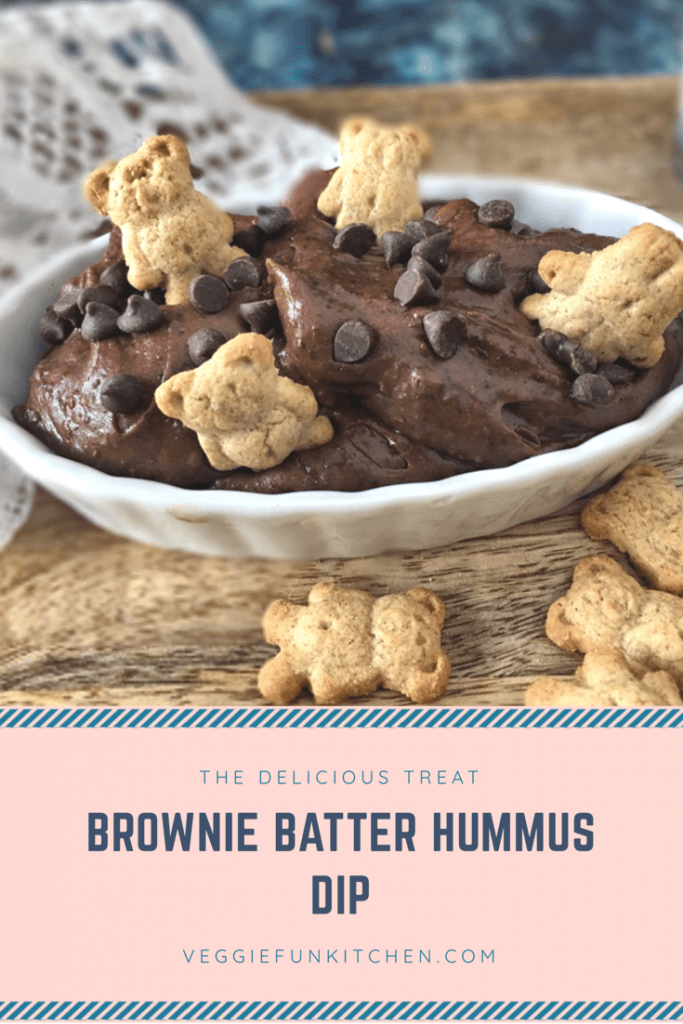 Who would guess that hummus could also be a tasty brownie dessert?!

It’s not technically a brownie because a brownie has chocolate and is “brown” – but these delicious Almond Butter Blondies are some of my favorites! 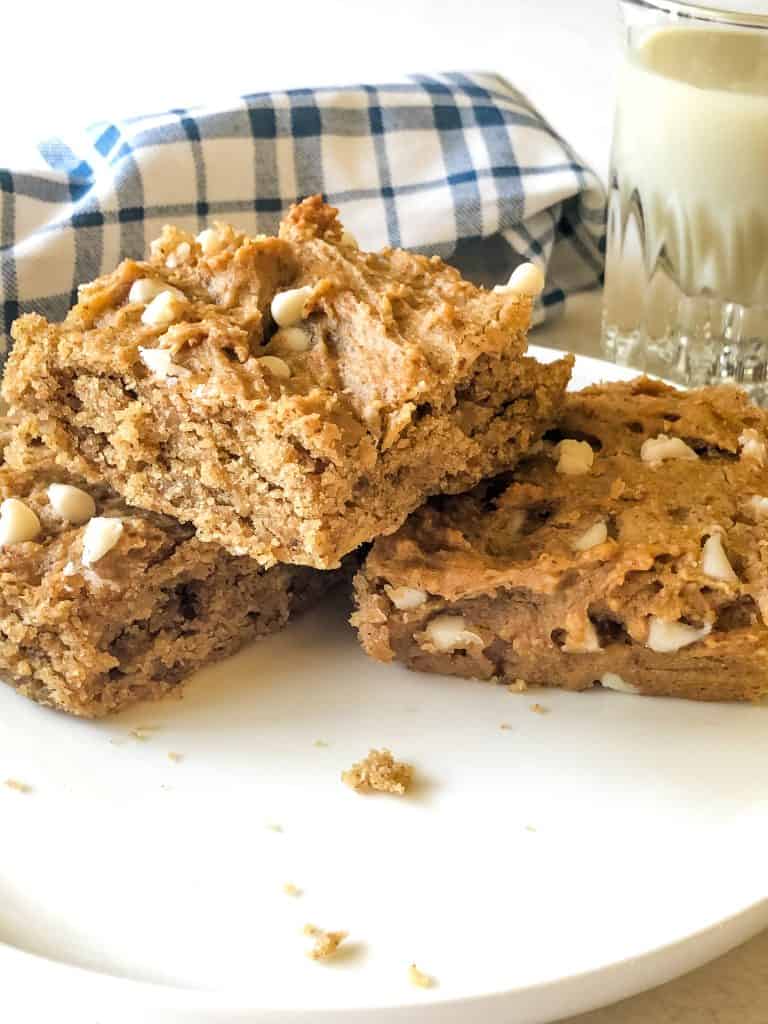 I hope you enjoy this round-up post of my best easy vegan brownie recipes, but don’t say good-bye! Sign-up here for recipe tips and kitchen wisdom. I also invite you to email me with any questions you have. When you become a part of the Veggie Fun Kitchen Community, you’ll learn to cook great tasting recipes the whole family will enjoy! (No spam here! I will never share your email, and you can unsubscribe whenever you want!)

And check back soon because I’ll be adding more awesome easy vegan brownie recipe links as I create them!