5 from 9 votes
Jump to Recipe 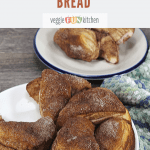 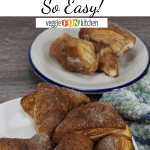 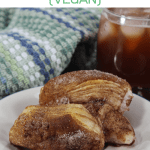 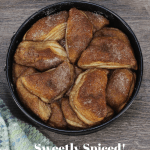 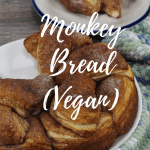 Vegan Monkey Bread, sweetly spiced with cinnamon, ginger, nutmeg, and cloves; and made with vegan compliant ingredients. This monkey bread is a quick and easy fun weekend breakfast the whole family will enjoy! 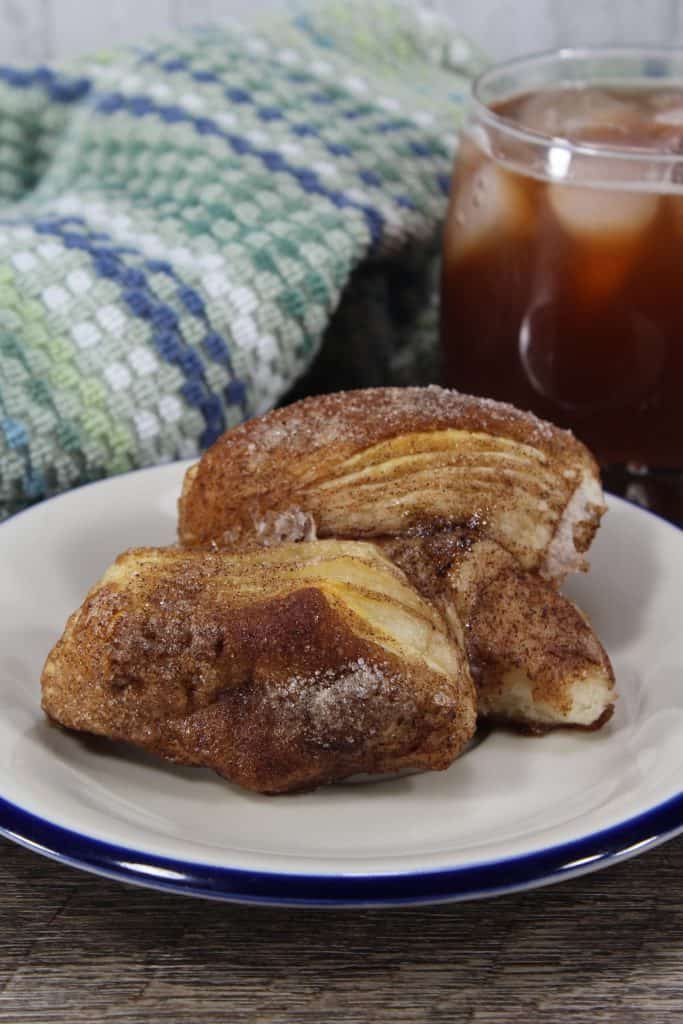 I always thought monkey bread was the strangest name for a pull-apart cinnamon sugar bread. According to Wikipedia (which knows all!), monkey bread is called such because it can be picked apart like a little monkey would. Makes sense!

I’ll bet your little monkey would like some of this yummy cinnamon sugary bread for a surprise weekend breakfast or brunch! 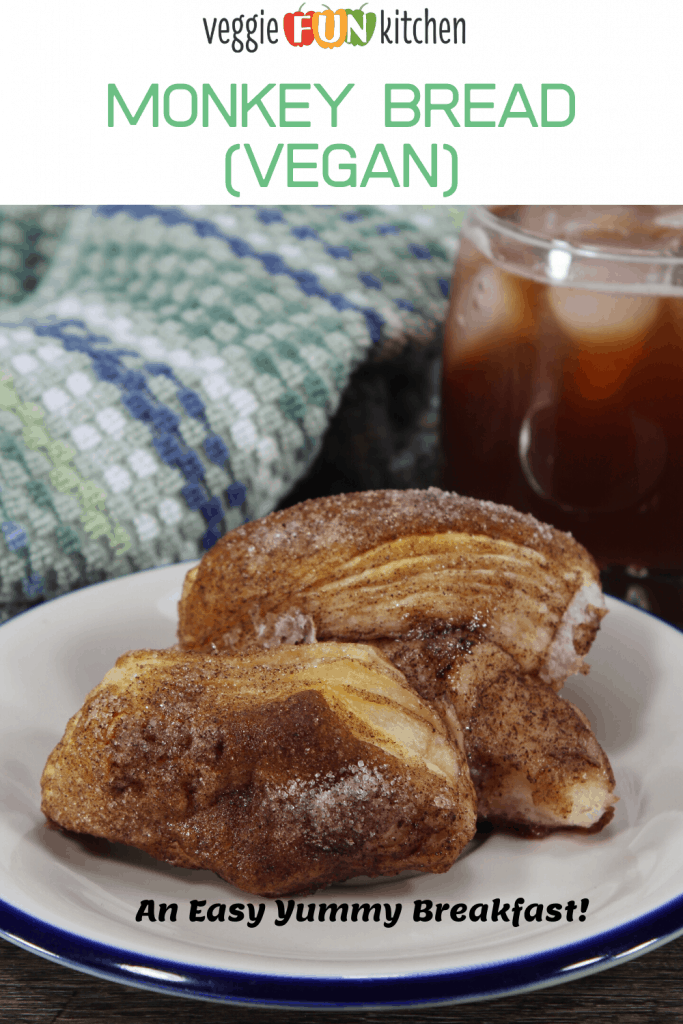 Looking for some other kid-friendlyvegan breakfast or brunch ideas? Try these Peanut Butter Banana Roll-ups, or Cinnamon Apple Overnight Oats! Or how about Healthy Banana Pancakes? And if you are looking for healthy and tasty, try my 2-minute healthy overnight oatmeal. So Good!

To Make This Recipe for Monkey Bread, You Will Need: 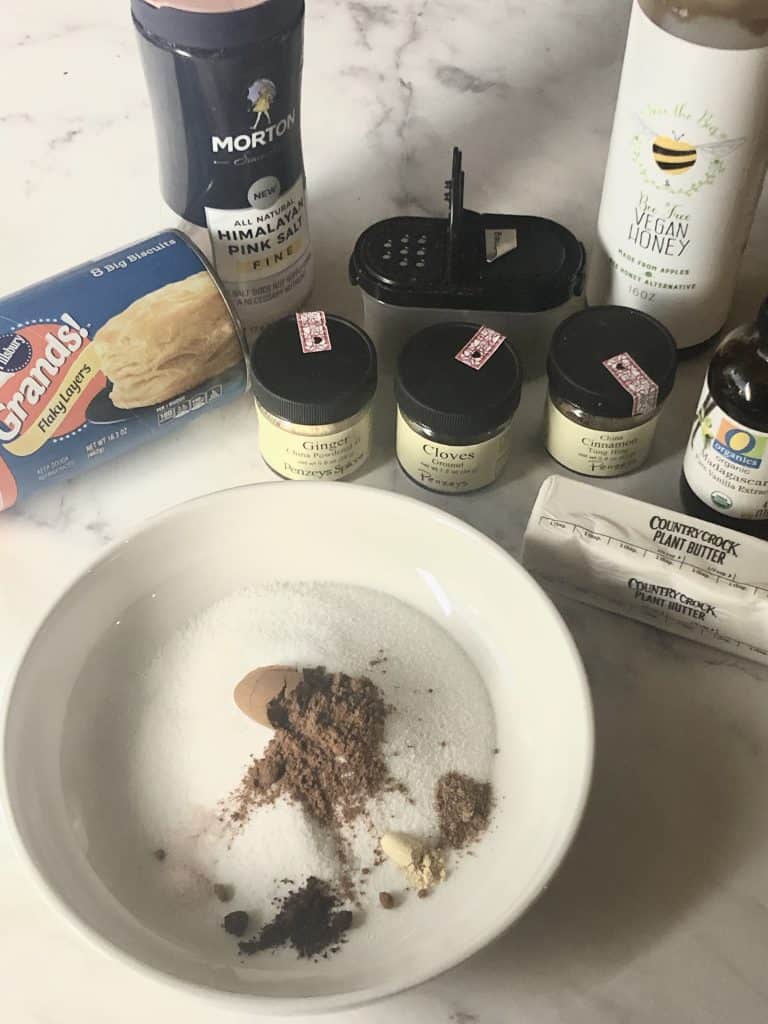 Can Monkey Bread Be Made Vegan? 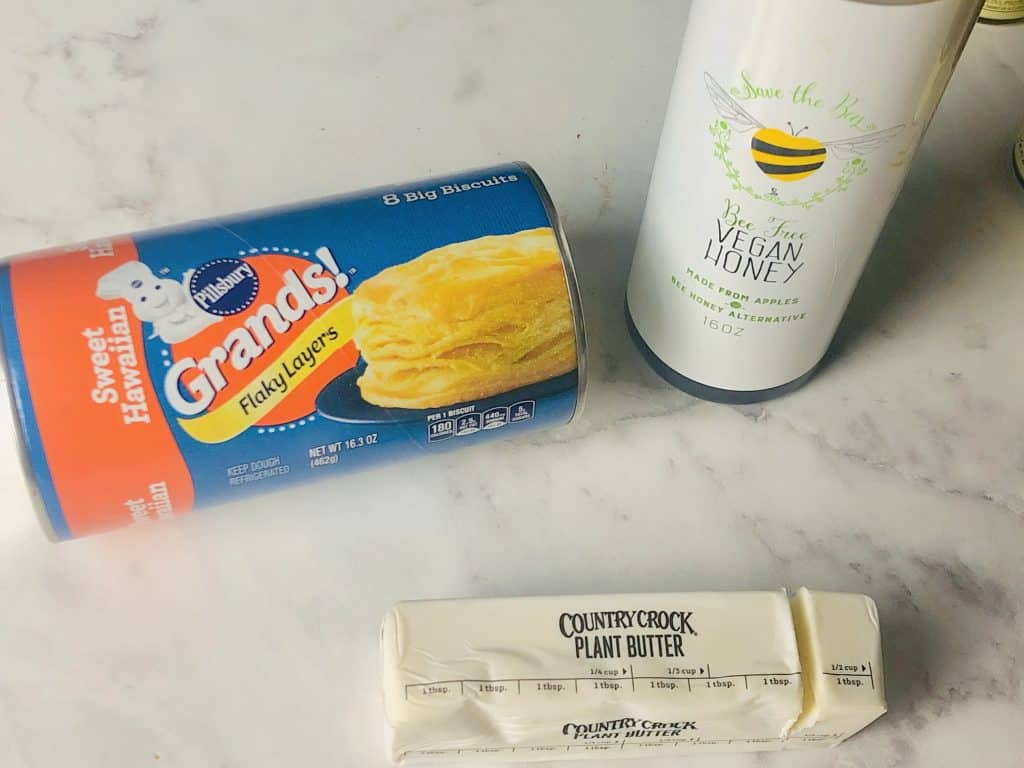 Yes it can! Just source the right ingredients. You will need to find:

The canned biscuits were a little tricky as most contain milk ingredients. Pilsbury Grands Sweet Hawaiian happens to be dairy-free (but is processed on shared equipment). I understand that Annie’s also has a dairy-free flaky biscuit. You can also read the ingredients of your store brand. I find that store brands are often more vegan-compliant than national brand.

The vegan butter I prefer is Country Crock plant butter.

The choice of liquid can either be agave, vegan honey (affiliate link), or maple syrup.

Sugar may or may not be vegan as it is often processed with bone char. If that is against your ethics then source organic sugar or one specifically labeled vegan (I believe the brand Sun Crystals is vegan. It is not readily available in all areas though.)

What Pan Should Be Used for Monkey Bread?

I always used to use a tube-type of pan like a bundt pan. I’ve recently begun using a spring-form pan though (affiliate link) because it makes the monkey bread so easy to remove. 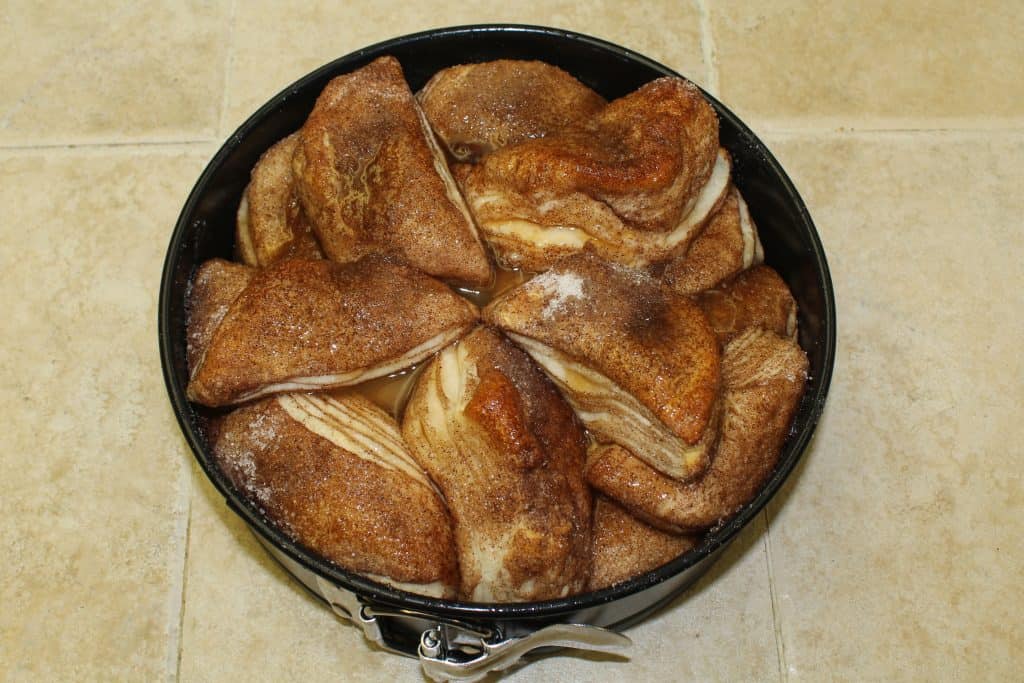 Please read through the tips and trick sections so that your monkey bread will be super delicious too! (You can skip ahead to the printable recipe card if you already know what you are doing.)

Place the sugar, salt, cinnamon and other spices in a small mixing bowl and mix them well and set aside. 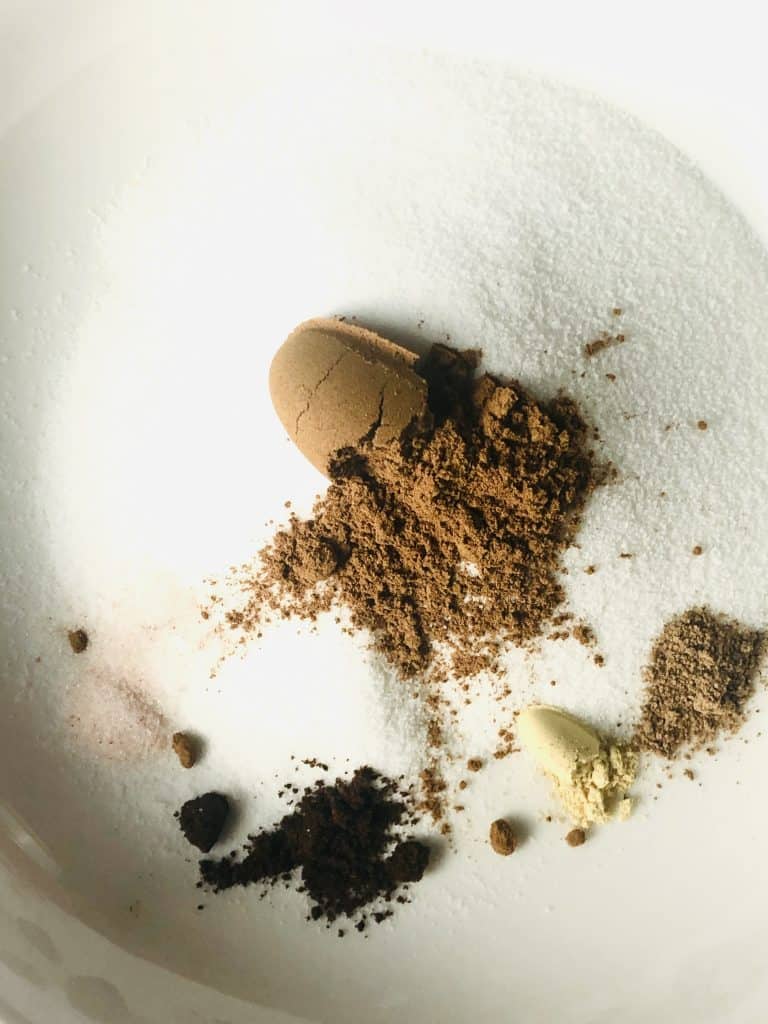 Remove the biscuits from the package and cut into halves. Place them in the bowl with the cinnamon sugar, and toss them until all pieces are evenly coated. Don’t worry if you don’t use all the spicy sugar you made. You can sprinkle the rest on the top of the biscuits, before cooking, or save the excess for your overnight oats or cereal! You can even core an apple and tuck some pecans and vegan butter inside with the spiced sugar and bake in foil. So yummy! 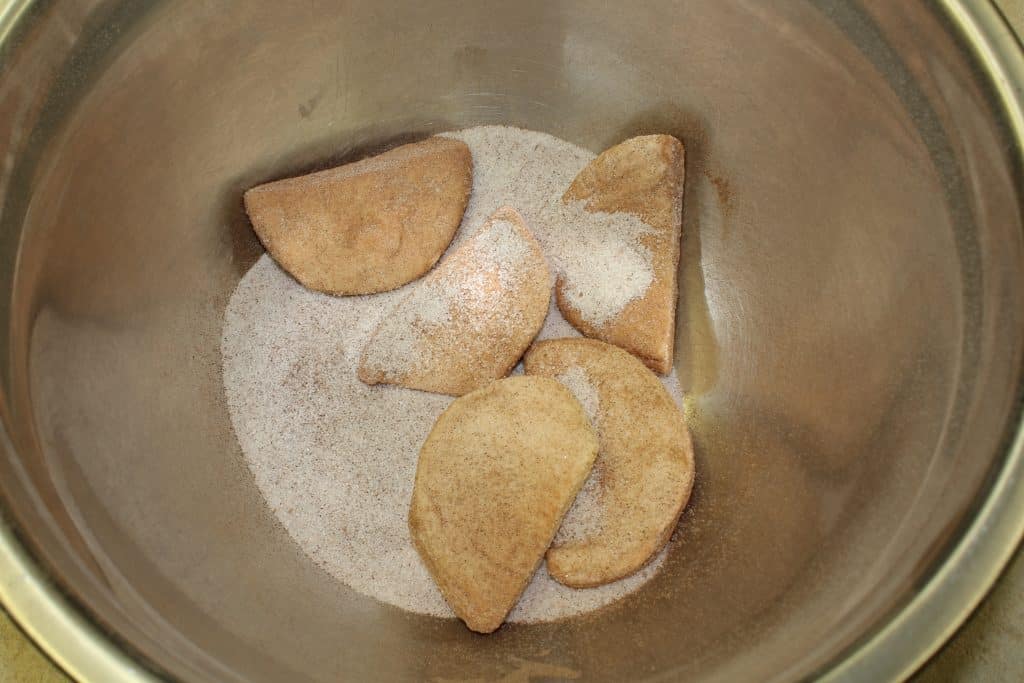 I spritz my 9inch diameter springform pan with coconut oil and place the sugared biscuit halves in the pan. in layers.

You can spoon in any of the leftover spicy sugar that didn’t stick to the biscuits. 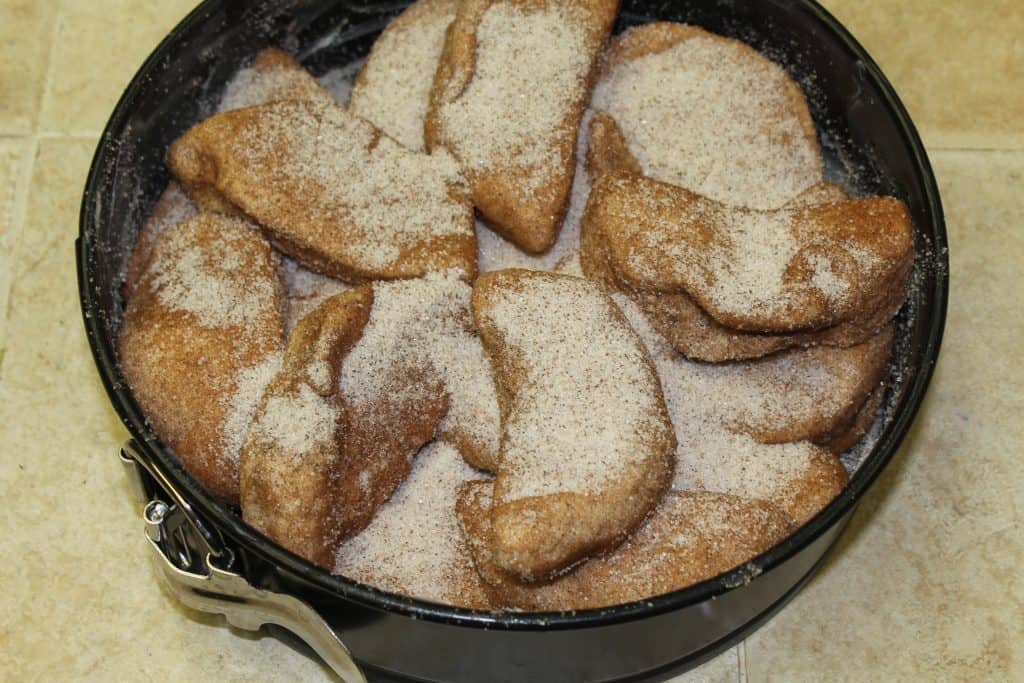 Bake the biscuits at 350° for 25 minutes. When finished cooking, pull up the top layer to make sure the lower layers aren’t still doughy. Put back in for 5 more minutes if necessary.

While the monkey bread is baking, in a separate small bowl, melt the vegan butter in the microwave and stir in  the liquid sweetener and vanilla.

When the  monkey break is done, use a teaspoon to drizzle this mixture evenly over the top. Put the monkeybread back into a 350  oven for 7-10 more minutes to set the glaze.

Allow to cool briefly before serving

The Recipe For Vegan Monkey Bread: 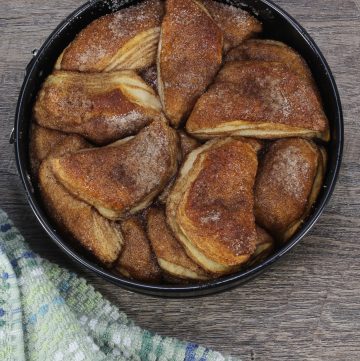 Vegan Biscuit Suggestions: If you are worried that the top is getting too done. Before returning to the oven with the sweet butter drizzle, cover with foil.