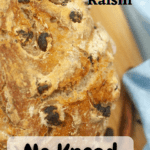 Cinnamon raisin no-knead bread is a tasty chewy loaf made with little effort in your dutch oven pot or other covered bread baking dish. This crusty rustic loaf is full of chewy flavorful raisins and cinnamon with a hint of sweet brown sugar. Slather on your favorite butter, jam, or cinnamon sugar sprinkle.

I love all of the carby homemade bread I’ve been experimenting with this year, I do! Give me a nice crusty loaf, a stick of (vegan) butter, and a pot of jam – and I’m in bread-eating heaven! What I don’t always enjoy doing, however, is making the bread. You know – the kneading, rising, punching down, and doing again…and again… and that’s before we even get to the baking part!

No-knead bread or peasant bread is perfect for me because it’s only a matter of mixing, shaping, and a little rising before baking.

This no-knead cinnamon bread is an easy, basic, quick (enough) loaf of bread to make. This recipe is not an artisan rise-all-day and night recipe, but rather one that you can easily complete in a couple of hours from start to finish.

What is no-knead bread?

No-knead bread, sometimes known as peasant bread or artisan bread, is a method of bread making and baking that requires no kneading, rising, punching down, and doing the whole thing again, but rather lots of time (up to 24 hours) to rise the bread and allow the gluten to form. Lovely pockets of air are formed in the crusty lofty loaf of bread.

This no-knead bread recipe is NOT that recipe! Please understand before making this loaf that this is the “quick” method – or two-hour method for making a loaf of dutch oven cinnamon raisin bread the no-knead way.

It will not be as lofty or crusty as the longer method load would be, but it’s still chewy and delicious and you won’t need to wait around for a whole day to enjoy your bread!

(If you do decide you want to do the longer method, understand that you will use less yeast than this recipe calls for. Stand by for that recipe coming soon.)

step one: The Yeast

First, measure out your very warm/hot water. If you are new to yeast bread baking you might not be aware of how hot the water needs to be. It should be much hotter than room temperature but not so hot that it kills the yeast. If you have a candy or liquid thermometer then check to see if the water is 120 degrees hot. This will be the perfect temperature for the yeast.

Add the yeast to the water and let it sit for five minutes to make sure it starts to get foamy. If it does not then throw it out and do not use the yeast mixture in the bread. Either your water was at the wrong temperature or the yeast was expired.

Make sure you are measuring the flour correctly. This recipe calls for the measuring cup method, not the (more accurate) weighing method.

It’s important that you don’t just scoop the measuring cup into the bag of flour to measure. If you do it this way then you will probably scoop too much flour into your measuring cup, compacting it while you are measuring. This will lead to a heavy loaf. You don’t want a heavy loaf…

Once the yeast is foamy, pour the yeast/water mixture into a large bowl add the flour and mix with the yeasty water solution. You can stir with a sturdy spoon till mixed.

Steps three and four: add the other ingredients

Add the brown sugar, salt, and cinnamon, then begin to work the mixture into a sticky but firm ball of dough. I usually work it with my hands…but it’s not kneading!

Fold in the raisins so that they are distributed throughout the dough. Sometimes I use golden raisins, and sometimes dark raisins. It doesn’t really matter.

Cover the dough ball with a damp cloth or plastic wrap and let sit for one hour before uncovering it. The dough will have just about doubled in size.

During the resting and rising time preheat your oven to 450°. Before heating your oven, make sure that the oven racks are in the correct position and that you have enough head space to place the dutch oven pot on the rack.

Lightly dust a flat dry surface and gently work the dough into a round loaf. Remember that this isn’t really kneading, just shaping.

Add a large sheet of parchment paper to the Dutch oven or whichever covered baking dish you are using and place your dough inside.

Cover with the lid and bake at 450°f for 30 minutes. A lot of recipes will tell you to preheat the dutch oven before baking your no-knead bread recipes. I have read that if your dutch oven pot is ceramic coated, you could wrap the coating…so I don’t. And it’s fine!

At 30 minutes, remove the lid and if your crust is not yet a lovely golden brown, then continue baking for another 5-10 minutes.

Allow for cooling before slicing…if you have the patience to wait! I don’t and in my kitchen, I usually end up smashing the hot loaf with the knife because I’m impatient! 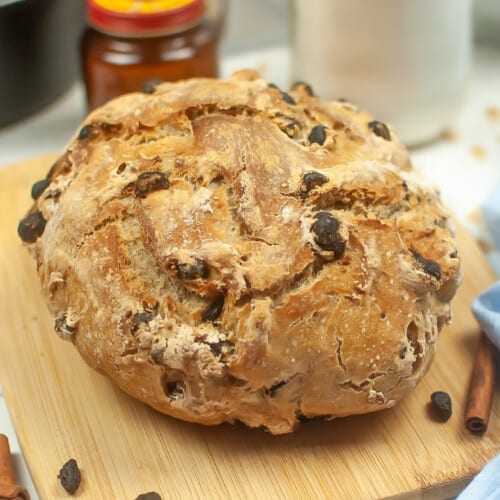