5 from 8 votes
Jump to Recipe

This maple cinnamon butter is sweetly spiced, creamy, and delicious on biscuits, toast, or sweet bread. Whip it up with a cinnamon and maple syrup combo along with some powdered sugar and vanilla. This recipe can be made vegan-friendly with your favorite butter – mine happens to be vegan!

Is there anything more indulgent than spreading some smooth sweetened cinnamon butter on a flaky biscuit right out of the oven? Or on pancakes? Or on fresh bread? I challenge you to find a tastier carby (comforting) treat on a lazy weekend morning!

A special note about the ingredients

This is a vegan blog so of course, I am using vegan butter! Make sure to use a brand that you would enjoy eating without all the cinnamon and sugar. Just like when cooking with wine, if you use nasty tasting junk, then your final product will taste…nasty. Luckily for us, there are many delicious vegan options available.

There are a couple of brands I like best including Miyoko’s and Country Crock.

I strongly suggest using stick butter. The texture of the finished whipped butter will hold up better. And it’s so much easier to measure a half cup of butter when you use a stick. Most vegan butter, as well as dairy butter, comes premeasured and one stick is most often one-half cup!

Speaking of dairy butter… I do realize that some of my readers are just looking for a delicious recipe for whipped cinnamon butter.

Did you notice that this recipe doesn’t call for salt? That’s because vegan butter typically has added salt for a more buttery flavor (and is very delicious!) If you are using dairy butter then do not use unsalted butter.

For this recipe to work best, you should try to use a similarly flavored butter. If you are using unsalted butter then taste and sprinkle in a little salt.

Often this type of sweet buttery spread is made with honey. This recipe is vegan friendly so we are using maple syrup instead.

Please…PLEASE! For the love of all that is buttery biscuits and toast..please use real maple syrup!! I beg of you: NO fake maple syrup! Thank you!

If you are ethically vegan, you might choose to use organic powdered sugar.

It’s so easy! This recipe calls for little prep time and less effort. Just follow these steps for a tasty spreadable topping for your favorite baked bread or biscuits.

Start by bringing the stick butter to room temperature. You do not want to microwave your butter because it’s too easy to microwave for a nano-second too long and have an oily mess to deal with.

Simply set the unwrapped vegan buttery stick on the counter in a safe place (you can read my story below the recipe card) to soften. I always loosely cover mine so that dog hair and dust don’t fly into it.

What if I forget to soften the butter?

The prep time listed includes time to soften the butter. If you have forgotten this step and have hard cold butter and little patience or time, you can take the butter right out of the refrigerator and slice it into small pieces to speed up the process. It will shorten the softening time by about half.

Step 2: the rest of the ingredients

Add the cinnamon and maple syrup, vanilla extract, as well as the powdered sugar. I do not use a small bowl but a medium-sized bowl. Using a mixing container too small might mean a messy powdered sugary mess!

Which type of mixer should I use?

My personal choice for easy mixing and cleaning is to use an electric hand mixer. Of course, you could also use a food processor or a stand mixer; but I find those cumbersome to lug around the kitchen and a bother to clean for a small job such as this recipe.

If you do use a food processor then do use a spatula to carefully scoop the butter away from the sharp blades.

I caution you to not try to stir everything by hand with a spoon. The flavor will still be delcious but your sweet butter spread with not be light and fluffy.

Whip the softened butter, powdered sugar, vanilla extract, maple syrup and cinnamon together until everything is nice and fluffy. I start my electric hand mixer on a low speed and then gradually turn it to high – otherwise the powdered sugar may fly!

Is this maple sryup and cinnamon buttery spread healthy?

This is not a health food. No healthy fats here! Just because it’s vegan, doesn’t make it healthy. Vegan butter is made with oil and does include saturated fat – that’s what makes it nice and smooth!

As an alternative spread, try a healthy homemade nut butter without added sugar or oils. You can always add in some cinnamon and a little maple syrup for flavor. (In fact, I’m now inspired to develope such a recipe. Stay tunned!)

Store any left-overs in the refrigerator in an airtight container. This sweet cinnamon butter recipe will last a couple of weeks this way. You may notice some seperation of the oils. Just give it a stir and you will be good to go.

Spread on your choice of toasted waffles, biscuits, or warm bread. It goes perfect with my delicious Cinnamon Raisin Bread or Orange Cranberry Bread (both comming soon).

For some other easy delicious recipes for a lazy weekend morning, try my: 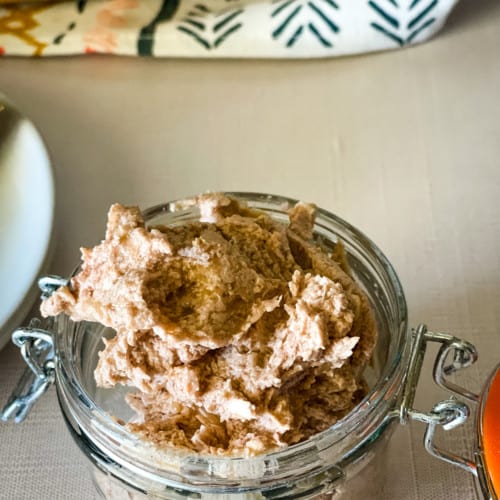 A serving size is one-half tablespoon. I find that enough for lightly buttering a half piece of toast.  If your serving size is larger (which mine often is!)  then adjust the nutrition information accordingly.

My uncessesary yet amusing story

I know people don’t like the blaa blaa blaa that comes with a lot of food blogs. But sometimes we have a story we just have to tell! Because that’s essentially what we are: storytellers! This is why I sometimes put my completely unnecessary – yet somewhat amusing stories at the END of the post.

So one weekend morning I woke early to make the coffee and think about something a little bit different for breakfast (we usually just eat broccoli – really!) I remembered that I had canned biscuits calling out to me and decided they’d be perfect with my maple cinnamon butter.

Have you ever been on autopilot with one eye opened and one eye closed? That was me! I put the butter on the counter to soften, let the dogs out to potty, let them back in, and made the coffee.

I got out the mixer, cinnamon, maple syrup, and other ingredients and reached out to where I thought I remembered I had put the butter only to find it missing. Not there at all! Hmmm, I must have forgotten!

No problem, I just reached in the refrigerator for another stick of butter, unwrapped it, and placed it on the counter. I then walked into the other room to get dressed, came back out to make my whipped butter and found it…MISSING!

Well, I knew it was NOT missing! That’s when I saw a little black and white tail whip around the corner and followed it to find her stash! Not only were the partially eaten sticks of butter there, but a pancake turner, my missing toothbrush, and a jar of peanut butter she had grabbed at some point. (And how was she able to carry the jar? – I have NO idea!)

So lesson learned: If you have a naugtly little doggy then place your butter far back on the counter in a safe place!