5 from 10 votes
Jump to Recipe 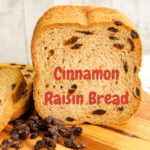 This cinnamon raisin bread recipe is made using a bread maker. It is soft on the inside, nice and crusty on the outside, and sweetly spiced with cinnamon, a little sugar, and chewy sweet raisins. Bread machine cinnamon raisin bread is so easy to make! you just set it and forget it; and before you know it, you’ll have a tender crusty loaf of warm sweet bread for breakfast or a snack.

Love cinnamon? Craving a loaf of freshly baked bread? One that’s smothered in butter or jam? You are going to love this bread machine cinnamon raisin bread! It’s so easy to make and so good!

Bread makers are a special kind of miracle! Just throw in the ingredients, tell the machine to start, walk away to enjoy your morning; and before you know it, the aroma of freshly baked bread has filled every corner of your house! Pull out the pan and turn out a freshly baked loaf. Time to enjoy a slice of cinnamon raisin bread slathered in my whipped maple cinnamon butter!

Reasons why this is the best cinnamon raisin bread

Bread machines are back!

You might not be old enough to remember, but bread machines (or bread makers) first came on the household bread-baking scene in the mid-’80s. Being a big fan of homebaked bread, I was certainly intrigued by a machine that handled the laborious kneading work (along with the guesswork) for me, and still produced a warm fresh loaf of bread that turned out as good as Grandma made!

And I, along with an army of other young 80s wives, dutifully bought a bread maker, experimented with recipes or bought boxed mixes, and fed all the delicious wholesome (or not) homemade bread to our family that we proudly made all by ourselves – with a touch of a button…on a bread machine!

Then, with the hate for all things carb that came in the late ’90s and early 2000s, bread machines quickly lost favor and were hidden away in the dark recesses of garages and basement corners. You could easily pick up a used one at a garage sale for a quick five bucks. Fast forward to 2020…

Thanks to 2020 (my slightly cynical version)

Fast forward a couple of decades to 2020 and we were all stuck in our houses – trying our hand at gardening, quilting, and baking bread. Really. If you are reading this blog post some years in the future you might not be totally aware. But in 2020 – with the kids tucked safely away and busy with their zoom classes – we were searching for simplicity, remembering an easier time, filling the boredom… and baking homemade bread!

Despite our gardening failures and lopsided quilts, we all decided that we actually liked bread! Carbs be damned! They filled an empty space in our souls…

I don’t think I’d be rewriting history (much) to point out that when we all had to get back to the job thing, while we no longer had hours to knead, rise, rinse, repeat – we still wanted our crusty loaf!

Luckily, Amazon delivery was only a day or so away and we could go back to our 9-5 job and still easily make our home-baked bread anytime we wanted – in a bread maker!

A special note about some of the ingredinets

The flour, bread flour -vs- all purpose flour

This recipe calls for bread flour rather than all-purpose flour. You could use regular all-purpose flour if that is all you have. BUT!! But the big difference between bread flour and regular flour is that bread flour has more protein which produces more gluten. Gluten is what we need to give our bread dough that nice stretch and elasticity which in turn will produce a chewier more satisfying loaf of homemade bread. Read more about the different types of flour and their best uses in this article by Bon Appetite.

This is a vegan blog and so the recipes will include vegan-friendly ingredients. You could also use margarine or salted butter. I don’t recommend using vegetable oil for this bread machine cinnamon raisin bread recipe though as it was not developed for that.

Today I used basic regular raisins in my raisin bread. I really do enjoy using golden raisins too because they look so pretty in the loaf and are slightly sweeter.

Make sure to use nice fresh plump raisins for your cinnamon bread recipe. I think the reason people hate raisins in baked goods (and yes, haters gonna hate), is that the raisins used are too dry and hard. You can try soaking them beforehand to see if they plump up. Just make sure to drain the liquid and pat dry before using. Or, leave them out.

Just don’t like raisins? Would you rather just make cinnamon bread without the raisins? Sure, be my guest. Not everyone is a raisin fan.

This recipe uses granulated white sugar. If you are an ethical vegan, you might choose to use organic sugar. Brown sugar might also be used but do not use a liquid sweetener such as maple syrup in this recipe as it might mess with the liquid/dry ratios.

A note about the bread machine I use

This recipe was developed using the Compact Cuisinart 2 lb Bread Machine (affiliate link) which I love! Chances are the recipe will work great in any bread machine. This particular bread maker has a few features mentioned in the instructions. Check to see if your bread machine has similar features.

Settings for Different types of breads

I love that this bread machine has settings to make various types of loaves. We will use the “sweet loaf” setting for this bread. (If your bread machine does not have that then just set it to white bread.)

This bread machine also allows for add-ins after the first knead and rise. If your machine does not have that feature then just make sure to add the raisins before the final kneading cycle. If that will be too complicated to remember, then go ahead and add them at the beginning – but I can’t promise the final result.

The wet ingredients should be at room temperature. Make sure the paddle is correctly installed in your bread maker and the loaf pan is properly set in the machine.

Add the water and room temperature vegan butter. You can slice it into small pieces if it isn’t quite at room temperature yet. But it should not be cold and hard right out from the fridge. You can also microwave the cold butter.

In the order listed, add the dry ingredients. First the bread flour, then the salt, cinnamon, and sugar. You can use table salt or sea salt. Just don’t use coarse salt or kosher salt.

Finally, make a little well at the top and add the yeast.

You’ll notice that we did not yet add the raisins. That will come after it has gone through the first kneading and rising cycle. Please see the directions about adding the raisins below.

Set your bread machine on “sweet loaf”, “light”, and “medium-sized loaf”. Press start. You will need to pay attention to when you need to add the raisins so you can’t just walk away…yet.

You will see the cooking timer on your bread machine. Depending on your machine, it will be about three and a half hours from start to finish.

If you have the add-in option on your bread machine, it will stop and beep at you after the first kneed and rise. This is your signal to add the raisins.

If you don’t think you are able to pay attention or wait around for that, then add them at the beginning and take your chances. It’s been my experience that the raisins get too mushed up if added too early. I’ve also heard that it can interfere with gluten development.

When the cook cycle has finished, you can carefully remove the loaf pan according to the manufacturer’s directions. Most bread machines have a built-in cooling time before the hot loaf pan is safe to handle. If yours doesn’t, then allow cooling for a few minutes according to the directions that came with your machine.

After taking out the bread machine pan, carefully remove baked bread. Remove the paddle if you didn’t already do that before the baking cycle.

Place the finished raisin bread on a wire rack or cloth to cool enough to cut. Use a cutting board to cut slices as needed. For continued freshness, I like to leave the loaf intact until I need a slice. This load of homebaked cinnamon raisin bread should stay fresh for a couple of days if tightly covered or placed in a plastic bag.

It would also be good toasted and spread with a little nut butter for a great flavor and topped with more cinnamon and sliced bananas for breakfast.

For some other delicious bread machine recipes from Veggie Fun Kitchen, try:

(I have been busy experimenting with lots of different recipes – many of which are coming soon!) 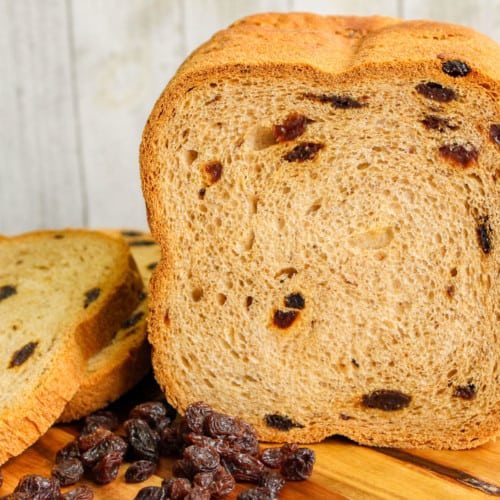 Cinnamon Raisin bread – Made in the Bread Machine

This cinnamon raisin bread recipe is made in a bread maker. It is soft on the inside, nice and crusty on the outside, and sweetly spiced with cinnamon, a little sugar, and chewy sweet raisins. Bread machine cinnamon raisin bread is so easy to set it and forget it; before you know it you'll have a tender crusty loaf of warm sweet bread for breakfast or a snack.
5 from 10 votes
Print Pin Rate
Course: Snack
Cuisine: American
Keyword: bread machine bread
Prep Time: 5 minutes
Cook Time: 3 hours 20 minutes
Total Time: 3 hours 25 minutes
Servings: 10
Calories: 208kcal
Author: Cindy Rainey

Rapid rise yeast is also known as bread machine yeast and might be sold with either label.  If your bread machine does not allow for add-ins, add the raisins after the first rise and before the final knead and rise.

4 thoughts on “Cinnamon Raisin bread – Made in the Bread Machine”