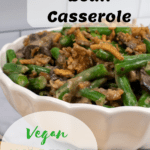 Vegan Green Bean Casserole made from scratch with fresh ingredients levels up the green bean casserole from your childhood. This recipe is made with vegan-friendly ingredients for a dairy-free flavorful creamy sauce and will become a new family favorite at every special dinner or event.

It wasn’t until my daughter’s finance showed up at a family dinner one night with homemade vegan green bean casserole in hand that I even realized it could be made without all the cans.

Unbelievable….that I never even thought about it. Because once you can make something with whole ingredients, it just takes a few simple swaps to make them vegan. So now my love for that classic holiday green bean dish can continue – with my green bean casserole recipe!

Why you should make this vegan green bean casserole recipe

You can use white or baby Bella mushrooms. The baby Bellas will have a deeper more “meaty” mushroomy flavor, while the white mushrooms will taste milder. Honestly, I usually just grab what they have that is already sliced (this is a shortcut I take), and that looks the freshest.

Did you catch the part about buying presliced mushrooms in the paragraph above? As long as the mushrooms are nice and fresh and plump, there is no reason to buy whole mushrooms and slice them. Unless you are going for less packaging or buying your mushrooms well in advance of using them.

Use the freshest green beans possible. Look for beans that are plump and dark green and without “rust” spots on the bean. If you are in a pinch, you can use frozen green beans. If they have been frozen they should, in theory, have already gone through the blanching process. Do allow them to thaw naturally before using.

As of this writing, the Organics Brand (Albertson’s) is vegan. It does not contain anchovies and a call to the company confirmed that it does not contain other animal products or by-products. They wouldn’t put it in writing for me though because…big companies. I am satisfied, however.

Sour cream adds a richness of flavor and is a little thicker than plant milk. But if you can’t find any at your grocery store then you can try adding plain vegan yogurt or vegan cream. I realize that these might also be hard to find. Plant milk such as oat milk will also work. Your sauce might be a little thinner. The brand I like to use is Tofutti brand vegan sour cream.

French’s Crispy Fried Onions are surprising “accidentally vegan”. This means that the company didn’t set out to make a vegan product. It just is. I say “surprisingly” because I would have expected the crispy coating to contain egg. But luckily for us, there is no egg involved.

If you use a different brand than French’s then just check the label. I looked at the Organic brand at the grocery store and I believe that brand is also vegan.

Of course, you could always fry your own onions…but this casserole is not THAT much made from scratch. But, it’s certainly an option if you are into that sort of thing!

Mince the garlic and set it aside separately. It’s okay to use jarred minced garlic for this recipe. I usually use a generous half-teaspoon per clove.

Cut the ends off from the green beans. If they are very long, then I cut them down to size (about one-half). Set the green beans aside separately from the other vegetables as you will be blanching them in the next step.

Blanching the green beans allows you to soften the beans before cooking. They will not soften enough during the 20 minutes of cooking time in the oven.

Place the prepared green beans in a pot of boiling water. The water will probably stop boiling once you place the green beans in. That’s okay. I cover the pot and set my timer for five minutes.

While the green beans are in the hot water blanching, prepare the ice water. I put cold water in a large bowl and add about eight cups of ice.

Once the timer goes off, drain the cooked green beans and put them immediately into the ice water. This will stop the beans from cooking and prevent mushy beans. The texture of the beans at this point is about what you will get out of the oven. If you like your green beans softer than this, then cook them a few minutes longer until they are the texture you are looking for.

Step 3: Saute the onions and mushrooms

Add three tablespoons of vegan butter to a large saute pan. Set the heat on high and add in the chopped onions, sliced mushrooms, and salt and pepper. Saute, watching the bottom of the saute pan so that it doesn’t burn. You will cook for about five minutes until the onions have begun to soften and the mushrooms have started to shrink down.

Add the garlic and continue to saute for one more minute. You don’t want to add the garlic at the beginning of the cooking process because five minutes is too long and the garlic might burn and become bitter.

You’ll be adding everything else except for the green beans and the fried onions. By this point, the beans should be cooled enough. I drain them from the water and allow for them to sit in the pan and dry out a little bit.

Back to your saute pan:

If your saute pan is oven safe to 400° you can just cook in the pan and then later transfer to a serving dish. I like to cook in a casserole dish and use that for my serving dish.

You will need a 3-quart casserole or a 9×13 baking dish. Sprinkle the remaining french fried onions on top and cover lightly. Place in the preheated oven for 20 minutes.

When it’s finished cooking, the creamy sauce should be bubbly. It will continue to thicken as it begins to cool.

This classic green bean casserole made vegan would go perfectly on any special holiday or buffet table. Vegans, as well as non-vegans, will love the taste of homemade green bean casserole. If your vegan sour cream is made with nuts then you will need to disclose this to the people you are serving.

Store the leftovers in a tightly covered container in the refrigerator for up to five days. The crispy fried onions tend to get less crispy over time. But honestly, I’m not mad about it. I kinda like the softer texture too!

It’s always a good idea to have a list of vegan recipes handy that you can pull out and use anytime that everyone – even the non-vegans love. 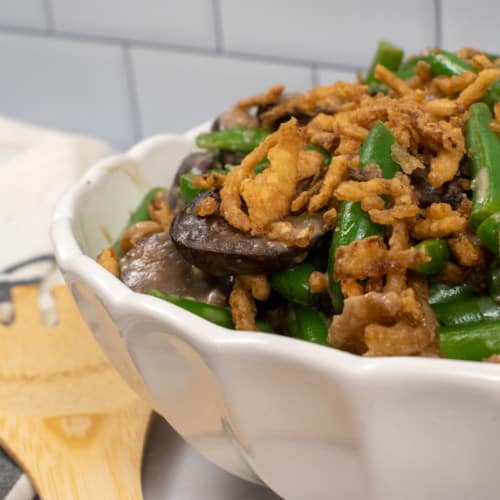 Serving size is one cup. Adjust nutritional information if your serving size is different. “French fried onions” refers to French’s Onions. You can use an off-brand if desired. Check for vegan compliance. You can also bread and fry your own onions.  Setting the green beans in ice water immediately after blanching will allow them to maintain a little crunch after cooking. If you like your green beans super soft (like canned green beans), then cook longer till the texture is just right.  If the sodium content is too high for you then start out with less salt and add to taste. You can also select sodium-free veggie stock or broth. For total control, make your own with my homemade vegetable stock recipe.  Vegan Worcestershire sauce can sometimes be found at the grocery store. I believe Organics (store brand at Albertson’s) is vegan. Read the back ingredients label. Or buy vegan Worcestershire on Amazon.  If you have a large saute pan that is also oven safe, you can simply transfer the entire pan to the oven to finish cooking.

1 thought on “Vegan Green Bean Casserole, Made From Scratch”