No ratings yet
Jump to Recipe 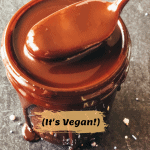 You can make a rich fudgy creamy vegan chocolate sauce with coconut milk and vegan butter. Heat it up with cocoa powder, sugar, corn syrup, and vanilla and you’ve got a luscious silky fudge sauce.

When I was a young girl, my mother’s chocolate sauce was practically famous…at least in our neighborhood. She was even mentioned in our church’s cookbook- the one in which recipes were named after the author – as in “Sister so-and-so’s famous caramel corn,” or jello salad, or in my mom’s case, her chocolate fudge sauce!

So of course I had to veganize it! Subbing in the vegan butter for dairy butter was not a problem. Finding the best substitute for heavy cream and canned milk was a little more challenging until I discovered coconut milk!

Coconut milk makes everything rich and creamy and is perfect for this delicious vegan fudge sauce!

For some other delicious vegan dessert toppings try:

How to make vegan chocolate sauce:

Start by mixing the sugar and cocoa powder together so that most of the cocoa powder lumps disappear. You can do this right in the saucepan you will be using, or in a separate bowl.

If you are using a coated saucepan then make sure to use a wooden spoon, rubber coated whisk, or similar device so that you don’t scratch your pan.

Next, you just add in the melted butter, corn syrup, and coconut milk and stir together so that everything is mixed in. I actually do this while it’s heating and coming to a boil to save time. If you are having trouble stirring the cocoa in, then use a whisk.

Then continue stirring while heating on med/high till the mixture comes to a gentle boil. You don’t want to see a full rolling boil, just some gentle bubbles on top. This will take about five minutes.

Once the chocolate mixture has started to boil, turn it down to med/low and continue stirring for about 5 minutes. Don’t let the mixture come to a full boil again because you risk giving the chocolate a slightly burnt taste.

Turn off the heat, stir in the vanilla and salt and you’ve got the fudgiest, creamiest vegan chocolate sauce ever!

Oh, you mean besides just eating this luscious vegan fudge sauce with a spoon? Sure!

You can top your favorite ice creams like my Creamiest Sweet Cream Vegan Ice Cream made with banana and coconut milk!

Or drizzle on Chocolate Almond Ice Cream with Mocha!

You could bring your fruit to the next level, or drizzle in coffee.

And now for the recipe:

Did you love this recipe? Want to share the love? It would thrill me if you could leave ⭐️ ⭐️ ⭐️ ⭐️ ⭐️ stars and even a comment. Did you know that this will help google to find this recipe when others are looking for something similar? Thanks, Cindy 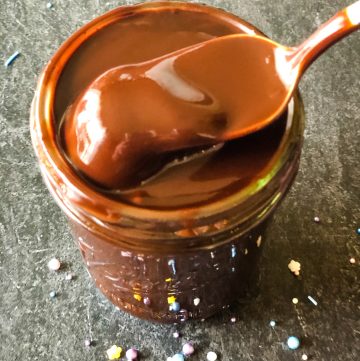 The Fudgiest Vegan Chocolate Sauce – Made with Coconut Milk