5 from 6 votes
Jump to Recipe 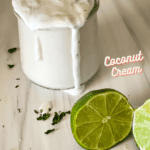 This rich and creamy dairy-free coconut lime crema is super easy to whip up and made with only a few simple ingredients: coconut cream, lime, garlic powder, and salt. It is delicious drizzled on soups, cauliflower tacos, plant bowls, or roasted vegetables.

I developed this recipe to go with my amazing new roasted butternut squash recipe with poblano peppers. This smooth and creamy sauce absolutely takes that soup from pretty good to freaking amazing!

I only felt it was right for other soups and plant-based meals to share in the same WOW as my butternut soup got with this tasty lime crema sauce. So here it is as a stand-alone recipe. (And here is my fabulous butternut squash soup as a little teaser – soon to be published.)

What to eat with a drizzle of your easy lime crema?

Make this dairy-free lime crema recipe to drizzle on top of any of these plant-based recipes from Veggie Fun Kitchen. They would be super tasty with the addition of this easy lime crema.

How to make easy lime crema with coconut milk

This is seriously the easiest coconut-based lime dressing- with little prep time and few ingredients. Just follow along with these few simple instructions.

Use a can of full-fat coconut milk for this recipe. You will just be using the cream part that floats to the top and becomes semi-solid.

You should get around a three-quarters cup of coconut cream from the top of the can of coconut milk. Handle the can gently before opening it. Shaking it around will cause the coconut cream and liquid to mix together and it will be difficult to separate.

If the coconut cream and liquid are difficult to separate then place the can upright in the refrigerator for a while and that should bring the cream to the top.

Coconut milk comes from coconuts, courtesy of Mother Nature; and sometimes the canning process is not perfect and you end up with more liquid than cream. If you are a tiny bit short on the cream (like two Tablespoons at most), then just add in the coconut water until you have a total of three-fourths of a cup.

If you have that rare weird can that does not contain as much cream as expected, then open another can.

Can I use lite coconut milk instead of full-fat?

Will I taste the coconut?

Yes, this is a lime crema coconut cream-based recipe. The coconut is actually quite tasty with the lime. If you really are strongly opposed to coconut cream you might try vegan sour cream or plain vegan yogurt (or if you are not vegan, plain Greek yogurt might work as well). If you do use sour cream, I recommend thinning with a little bit of unflavored plant milk as any vegan sour cream I’ve tried is much thicker than coconut cream.

I have not personally tried either of the above options and so really can’t say what the outcome will be. If you do decide to experiment and try either one, I’d love to hear how it turned out.

Room temperature lime squeezes easier and yields more lime juice than a lime straight from the refrigerator. You can also try rolling in around firmly between your hands or on the counter to prime the lime.

One lime should produce about two Tablespoons of lime juice which is what you need for this recipe. If yours falls a little short then cut open and squeeze a second lime. Or make up the difference with unsweetened lime juice from a bottle.

IN FACT…I think it’s perfectly okay to use (pure) bottled lime juice, and in fact, will often do just that! Sometimes I like to use the lime zest in my recipes. In that case, I definitely will use a real lime.

If you just don’t like the process of squeezing citrus for juice, have you considered using an electric citrus juicer? Mine has been a lifesaver for many recipes!

Add the coconut cream, lime juice, salt, and garlic powder to a medium bowl. No need to use a food processor or a blender. Simply whisk together the mixture well till nice and creamy and smooth! And that’s it! You’ve now got a delicious dairy-free lime crema ready to drizzle or spoon on your favorite plant-based dishes.

You can see that I used bottled lime juice when I made the recipe today.

How to best serve your vegan lime crema

Keep in mind that coconut cream is a semi-solid and becomes more solid when cold. When you first take the squeeze bottle from the fridge, it is going to be quite solid and impossible to use.

Simply set the bottle in hot water for a couple of minutes to heat, and give it a good shake. Your lime crema will be nice and runny and creamy in no time!

This lime crema dressing will keep in the refrigerator tightly covered for at least a week. Mine has never lasted that long!

What about the cilantro?

Cilantro has a tenuous place in my family. My daughter thinks it tastes like soap but I love it. Cilantro is actually pretty tasty with the lime crema.

The problem with using cilantro is in this recipe is that if you are going to use a squeeze bottle with a small tip, the cilantro will definitely clog the tip.

So if I am going to use a squeeze bottle with a tip then I’ll just sprinkle the cilantro on top of whatever I’m drizzling. If I’m going to serve it out from a jar or bowl then I’ll go ahead and stir some in.

What are those cool squeeze bottles?

People always ask about my squeeze bottles. I love these plastic bottles and use them for many of my sauces. They go in the dishwasher and hold two cups – the perfect size. You can get your own squeeze bottles on Amazon.

For some other delicious vegan dressings and dips from Veggie Fun Kitchen, try: 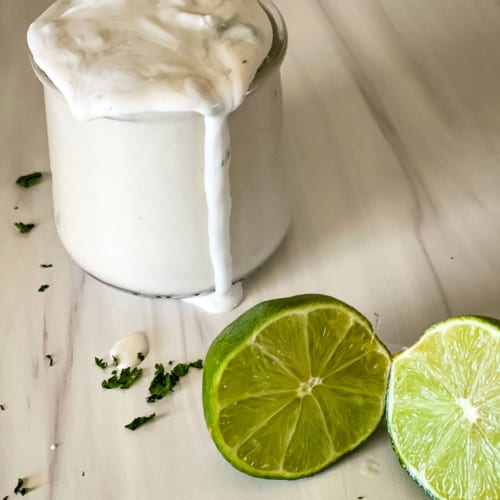 Whether you use a can of coconut cream or full-fat coconut milk, use only the top “cream” part of the can. If your can doesn’t yield the full three-quarters cup but is close, then use a little bit of  the coconut water left in the can.

Click to read the latest posts from Veggie Fun Kitchen: