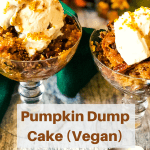 Easy pumpkin dump cake made with vegan friendly ingredients including a Duncan Hines Cake mix, canned pumpkin, sugar and all the seasonal spices. Just mix a couple of ingredients “dump” it in, set it and forget it. You’ll soon have a warm, spicy, sweet, pumpkin dessert!

I love fall! All the scents and sights, clear starry nights, and cool snappy evenings tell me fall is around the corner.

One of my favorite things I look forward to each year is the taste and smell of all things pumpkin spice….like my :

You will not find an easier vegan pumpkin dessert than this pumpkin dump cake!

This vegan cake mix hack is more like a crisp than a cake with a creamy spicy bottom layer topped with a Duncan Hines cake, chopped pecans, and vegan melted butter.

Did you know that most cake mixes aren’t vegan – even if you don’t add in eggs or dairy. They contain those ingredients in the dry mix. Weird. We are lucky though that most Duncan Hines mixes are what is known as “accidentally vegan”. That is, they didn’t set out to make a vegan mix, but there are no overt animal products in the mix.

Look for these easy vegan cake mix hacks on the blog!

Please be aware though that there are a couple of potential issues that may make boxed mixes not as vegan as you’d like.

So do your research and decide if this recipe is going to fit within your ethics. If it does, get ready for an easy delicious vegan pumpkin dessert!

Again, feel free to skip to the recipe.

How to make the pumpkin dump cake:

Simply mix up the canned pumpkin with the coconut milk, sugar, cinnamon, and pumpkin pie spice.

Evenly sprinkle the cake mix on top. Smooth it out if necessary.

Sprinkle the chopped pecans on top and then drizzle the melted butter as evenly as possible, covering the whole cake.

Put it in the oven and bake for about an hour. It will be nice and golden on top! Be careful to not over-cook and burn the the pecans.

You will want to cool for a while before you cut into it. The squares will only cut as nicely as pictured if it has been refrigerated and is quite cold. I like it warmer and so usually just put it in a bowl and top with vegan ice cream, or coconut whipped topping.

Did you love this recipe? Want to share the love? It would thrill me if you could leave five ⭐️ ⭐️ ⭐️ ⭐️ ⭐️ stars and even a comment. Did you know that this will help google to find this recipe when others are looking for something similar? Thanks, Cindy 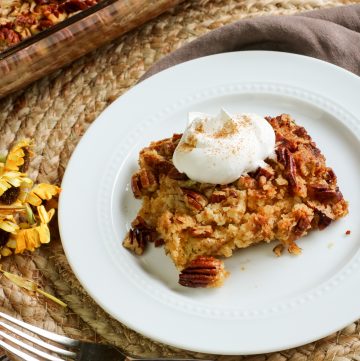