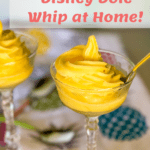 Click here for all of the delicious homemade vegan ice cream recipes, sorbets, and other frozen treats from Veggie Fun Kitchen.

Is Dole Whip vegan? You bet it is! But there are two things we need to get out of the way before we go further down this delightfully nostalgic frozen pineapple dessert path:

Was anyone else under the impression that Disney Dole Whip was actually made of fresh pineapple, frozen and blended into the soft-serve frozen pineapple masterpiece that we all loved and craved? ME TOO! I hate to burst your bubble, but the Dole Whip we have all come to know and love is really made from a powdered mix! Learn more about why everybody loves Disney Dole Whip in this informative article by Bon Appetit.

In fact, you can even buy the powdered mix on Amazon and make your own dairy-free Dole Whip at home. (I’m sure there are other methods to make this frozen pineapple dessert, but I use my Ninja Creami, and wow, does it turn out smooth, creamy, and so authentic tasting!)

Again, this is not like the healthy recipes you see using real pineapple chunks, pineapple juice, canned coconut milk, and such. Those recipes are out there. In fact, I’m sure it’s only a matter of time before I post one on Veggie Fun Kitchen…so stay tuned!

In fact, this is almost embarrassing, but you only need two simple ingredients…

Again, embarrassingly simple. But do read on for some tips and tricks that I’ve worked through so that you will get the best homemade Dole Whip too!

Just measure out one-half cup of mix into one-and-a-half cups of water. Then mix mix mix! Just whisk together with a fork (or an actual whisk) until it’s all mixed up.

Pour the mixed pineapple solution into the Ninja Creami pint container and freeze. The hardest part of this recipe when making it in the Ninja Creami is the wait. According to Ninja, everything needs to freeze for 24 hours before processing. I have found with the Pineapple Dole Whip made with the powdered mix, twelve hours is enough. Just make sure it is frozen solid before processing.

I often have more than one pint of Ninja Creami recipes in the freezer at a time. So that I remember what is in each container and when I can process it, I place a piece of tape on the top of the lid and write the recipe name and the date/time I froze it. That way I will know for sure. You can buy extra pint containers on Amazon or direct with Ninja.

It’s pineapple Dole Whip time! Remove the frozen pint container from the freezer and get ready to process. It should be frozen pretty solid by now and be ready to go. The following directions are based on my experiences. You should definitely consult the manufacturer’s directions in the owner’s manual that came with your Ninja Creami for the best results.

The first time you process using the Creami, you should watch the video recommended by Ninja. It will get easier the more you do it. Here is a recap:

I have never had it happen with the Dole Whip made from the frozen mix before. But, after processing, it might look dry or powdery on top. Sometimes you will see little frozen balls instead of creamy Dole Whip. This could be because your freezer is too cold.

If this happens then put the lid with blade assembly back on. Reinsert and process on “re-spin”. After that, your Dole Whip should be nice and creamy – like you’d expect Dole whip to be!

You can make a Dole Whip float as they do at the parks with pineapple juice or a sparkling beverage. I tried to be fancy with my Dole Whip and used a piping bag with a large star tip to pipe it into the crystal dishes. BIG MISTAKE!

This frozen Dole Whip recipe freezes SO COLD using the Ninja Creami that my hands absolutely froze frying to pipe it out! The end result was truly beautiful; BUT if you decide to do this too, use a cloth piping bag or wear winter gloves of some sort!

This recipe serves four one-half cup servings. I don’t know about you…but that is more like TWO servings for me and mine. (And is a good reason to make double and have two frozen pints in the freezer at all times!)

If you do have leftover dole whip then flatten the extra out and freeze right in the Ninja Creami pint container. If it freezes too hard to easily scoop, you can process it again using the Ninja Creami and it will be good as new! This is the beauty of using this miracle ice cream machine.

For some more Vegan ice cream, sorbets, and other frozen desserts from Veggie Fun Kitchen, try: 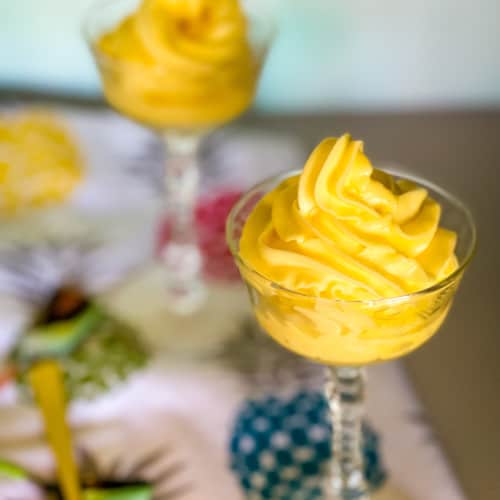 Here is the link to buy the Dole  Pineapple soft serve mix on Amazon.