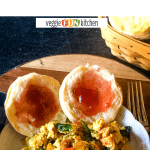 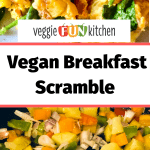 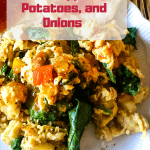 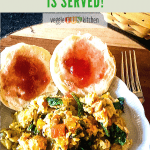 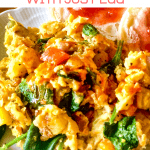 Vegan Breakfast Scramble with Just Egg tastes so authentically like the scrambled eggs you might remember. You’ll wonder if someone is playing a trick on you! Made extra delicious with bell peppers, onion, potato and spinach. Flavor with black salt (affiliate link) for a genuine scrambled egg flavor. 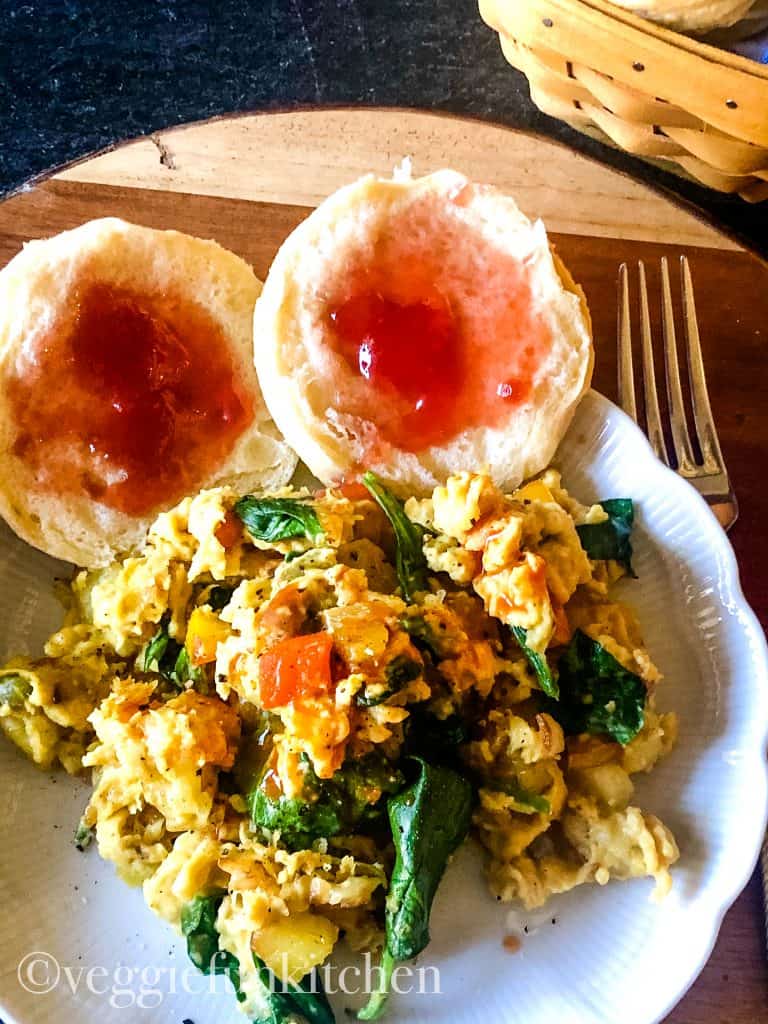 Hey, so do you think you might be looking at a photo of a fluffy  scrambled egg? Um hmm. If you tasted it, you might think you were eating one too. But nope, this vegan breakfast scramble is made with one of my new favorite products: Just Egg, which cooks and tastes pretty much like an egg!

I will tell you, I almost didn’t write this recipe post because to me it seems a little too simple. My son was visiting and I made this dish for a lazy Saturday morning breakfast. He asked me if this recipe was on the blog.

I laughed and said of course not! It’s nothing special! It’s just like making a breakfast scramble with real eggs, except that you use Just Egg instead. Anyone who knew how to scramble a chicken egg could scramble Just Egg as well.

He gave me a strange look before reminding me that he (being the vegan millennial that he is), had never actually scrambled an egg in his life. Not because he didn’t know how to cook; but by the time he was out of the house and making his own food, he was definitely not scrambling  – or even eating eggs. Good point! 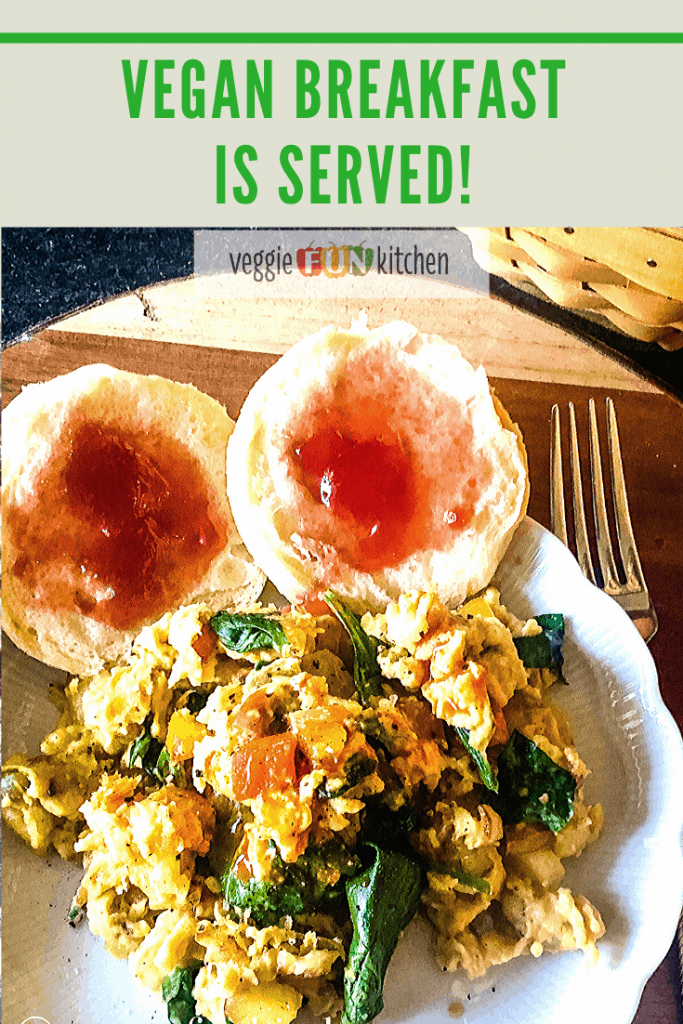 Just Egg is made from mung beans and soy as well as some other ingredients that give it its fluffy egg-like texture. It does contain fat though; but is cholesterol free. You can read more about Just Egg on their website. 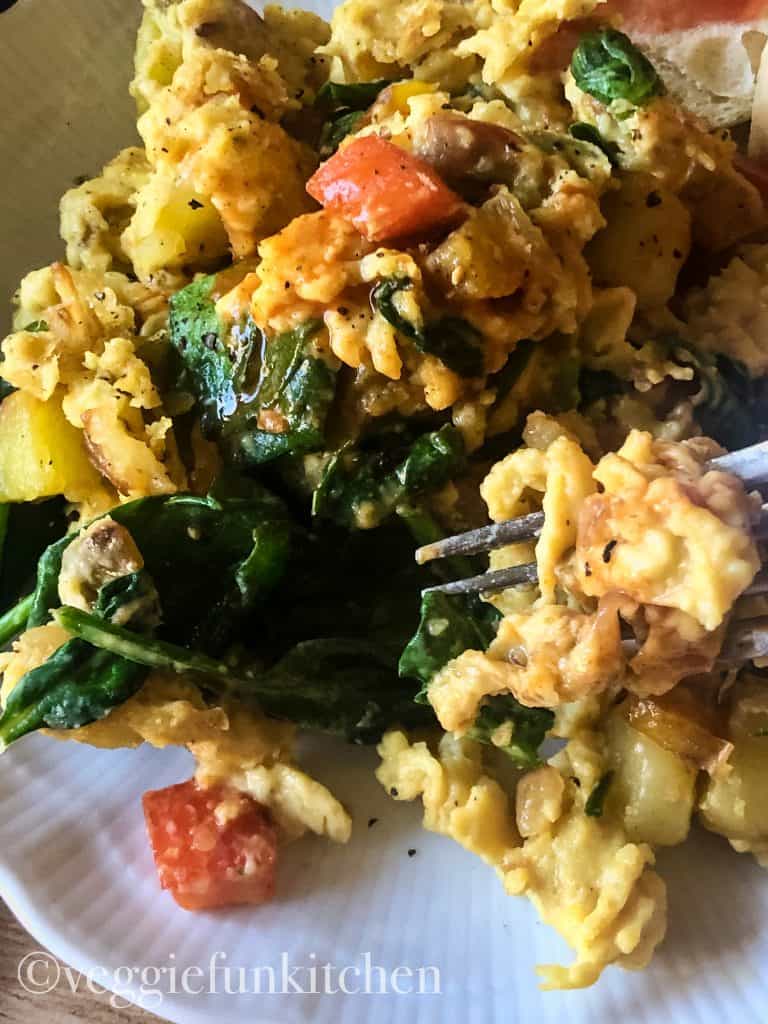 I like Just Egg so much better than tofu for a breakfast scramble. It simply has the authentic fluffy texture that tofu does not have.

For Some other Delicious Vegan Breakfast Ideas, Try:

To Make This Vegan Breakfast Scramble, You Will Need: 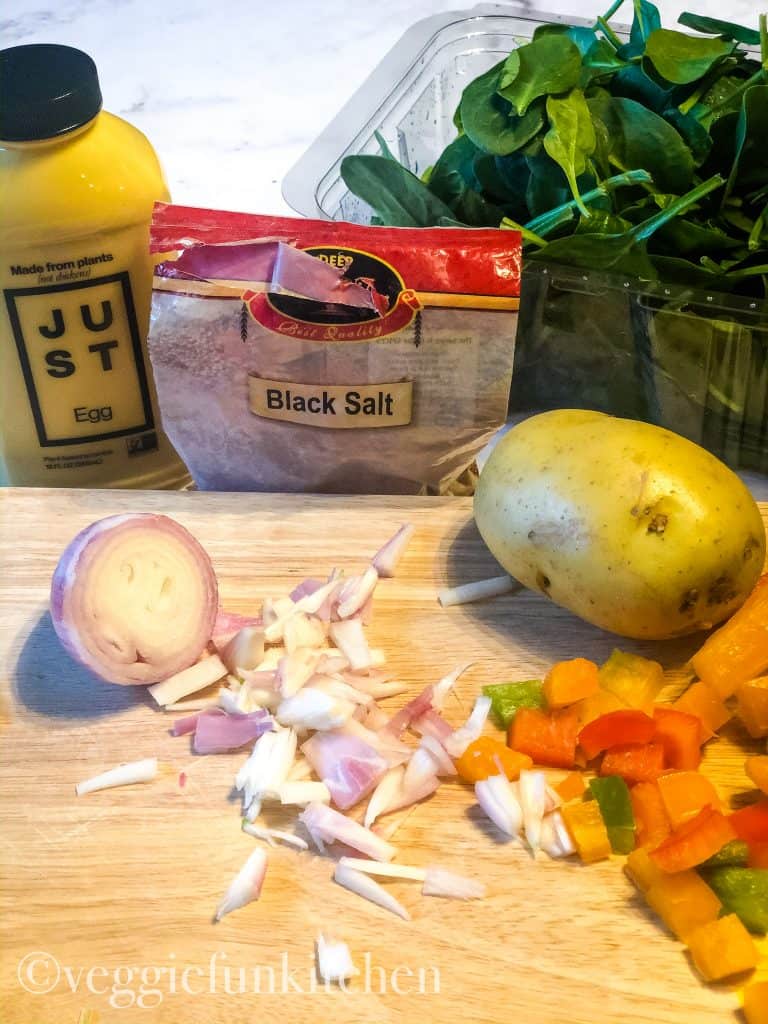 Tips and Tricks for Making this Vegan Breakfast Scramble: 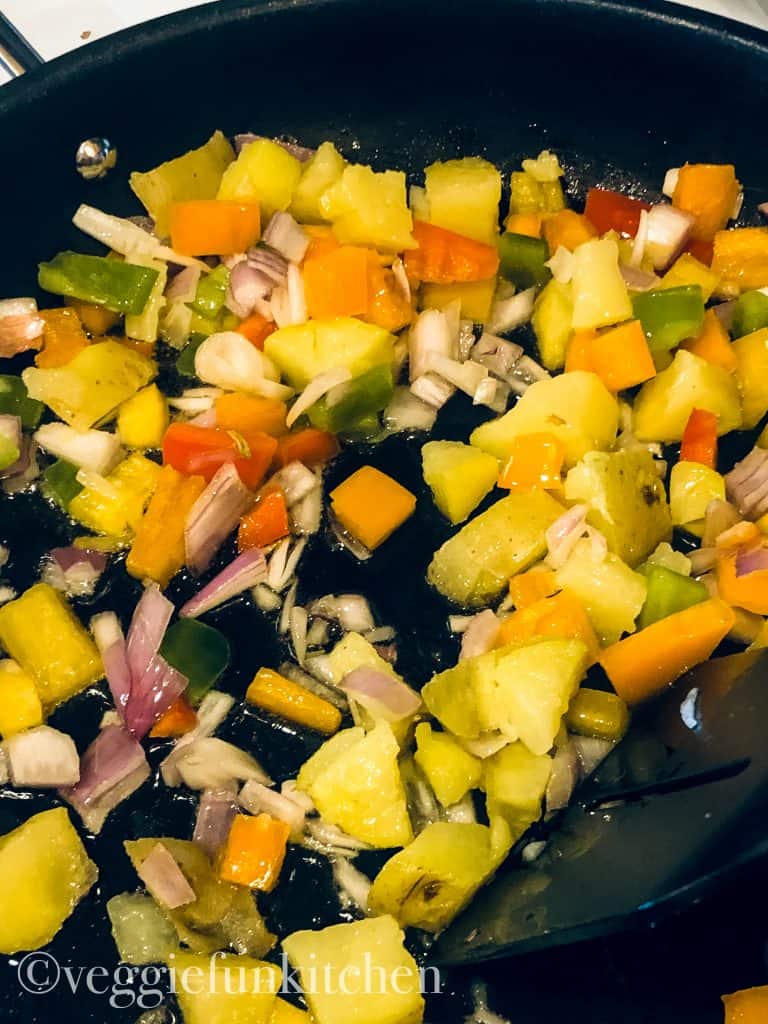 Cook the chopped and cubed vegetables in the cooking oil (I prefer to use avocado oil). For about 5-7 minutes until they are softened and the cubed potato begins to develop a nice crusty brown exterior. Salt and pepper to taste.

Add in a little black salt, or Kala Namak to the Just Egg. Black salt isn’t actually black; but a pinkish gray. And its doesn’t have a salty taste so much as it has a slightly sulphur-like taste – similar to cooked eggs. You might find it at an Indian grocery. I order mine on Amazon:

Add in 1/8 teaspoon, close the lid to the Just Egg and give it a good shake! 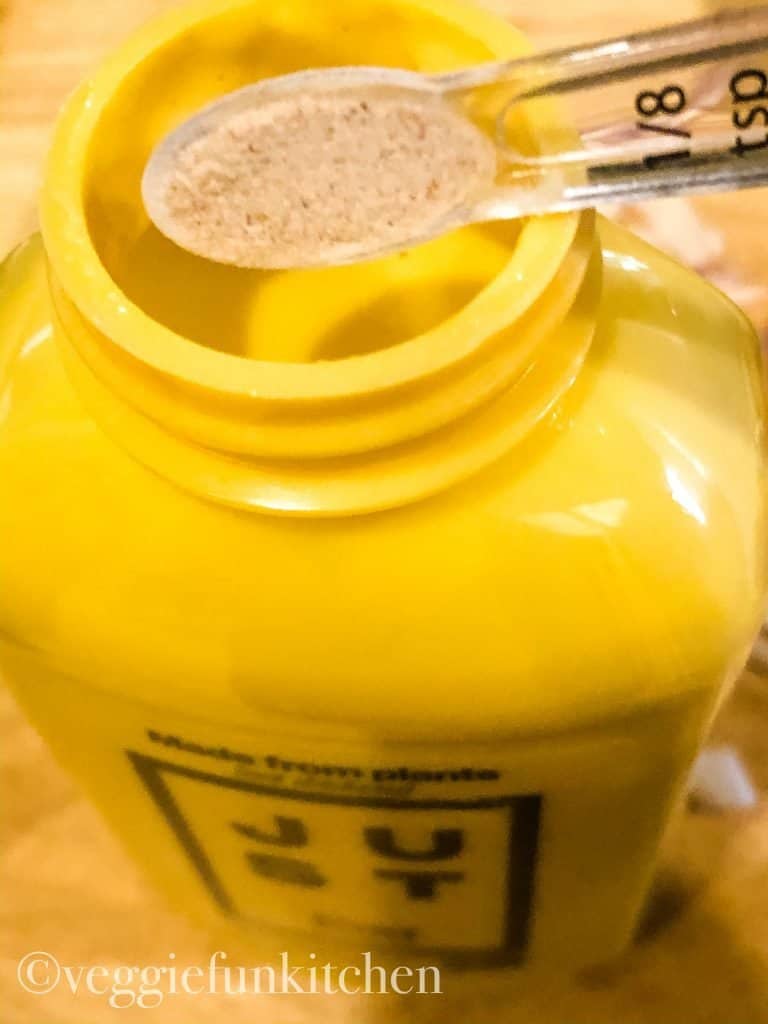 Pour the Just Egg all at once on top of the cooked veggie mixture. You really have to attend the scramble as it’s cooking or the Just Egg will stick to the bottom of the pan. Constantly scrape and turn as it is cooking. 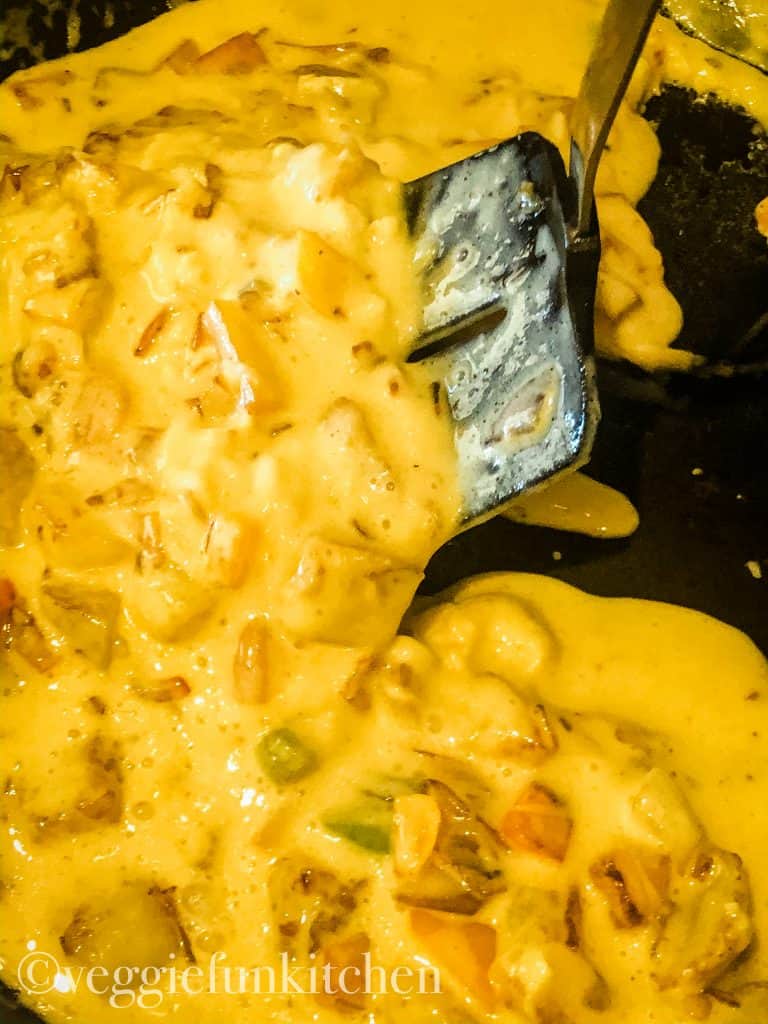 It will cook up nice and fluffy just like a real egg scramble would and in just about the same amount of time. Do be careful though that you don’t overcook it because it will be a little rubbery. When it looks like it is just about cooked, add in the baby spinach and continue cooking and turning for a couple of minutes until the spinach has wilted. 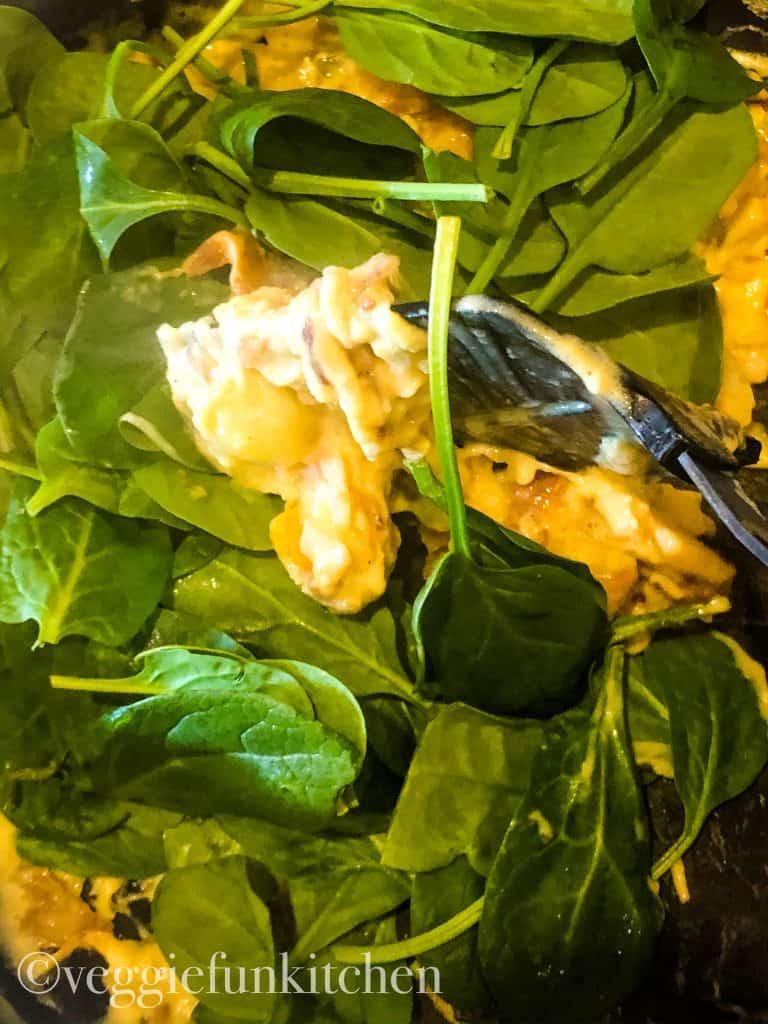 Breakfast is served! Did you ever think you’d be eating a breakfast scramble again?

The Recipe For Vegan Breakfast Scramble with Just Egg: 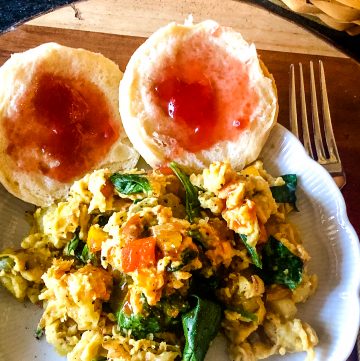 If you do not have black salt (kala namak), the flavor will still be very good, but may not resemble a scrambled egg flavor. Black salt gives a little bit of a sulfur taste. You can order it here on Amazon (affiliate link).