5 from 3 votes
Jump to Recipe 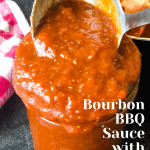 With a rich bourbon flavor, balanced by the subtle sweetness of figs, this bourbon bbq sauce is easy to make at home. This sweet and spicy barbeque sauce works great as a dipping sauce, a marinade, or a glaze you can grill with.

Made with bourbon whiskey, tomato sauce, brown sugar, some seasonings and spices, and of course the fresh figs, this rich and delicious easy homemade bourbon BBQ sauce is one of a kind!

This homemade BBQ sauce is thick and bursting with flavor! It’s made with brown sugar and whiskey. If you are looking for a sauce without processed sugar, try my Healthy Homemade BBQ Sauce. It’s oil-free and processed sugar-free.

A family friend was passing through last week and gifted me with two dozen beautiful, purple, fresh figs from his garden. Never had I ever eaten a fig before. I was honestly a little weirded out by them because of the whole wasp controversy (see below).

I did a quick google search and discovered that not only were figs considered a delicacy by many, they were also used in cooking. Really?

While I had never even eaten a fig – let alone cooked with one – I am never one to turn down a food challenge!

With a long holiday weekend coming up, I had been thinking about creating a new barbeque sauce with bourbon. So this sweet and spicy, rich and delicious, bourbon BBQ sauce with figs was born!

To make this fig bourbon BBQ sauce, you will need:

Start by slicing and dicing the produce.

To cut the figs, first removed the stems, then cut in half and continue chopping into small pieces.

My family does not like the heat from jalapenos, but we like the flavor. I use jarred “tamed” jalapenos in most of my recipes.

If the recipe calls for one jalapeno, I pull out about ten slices from the jar, shake the liquid off, and chop.

If you are using a regular jalapeno pepper, make sure to deseed, cut into strips and then dice small.

Once you have you figs and jalapenos chopped small, set aside.

Sauteing the onion and garlic:

This recipe calls for 1/2 of a red onion. You could also use one large shallot instead. Slice and dice the onion and mince the garlic. A shortcut I often take is to use jarred minced garlic. For this recipe, it’s perfectly fine.

Saute the onion and garlic in a little oil until softened. I use avocado oil for most of my sauteing.

Are you eating oil-free? No problem, just saute in a little veggie broth; but watch your pan so that it doesn’t burn.

Use a sturdy thick-bottomed sauce pan. Add in the sauteed onions and garlic, along with the figs, jalapenos and all of the other ingredients.

Stir and bring to a boil. The sauce will be quite thin still.

After the sauce comes to a boil, turn it down to a simmer and continue cooking, uncovered, for about an hour, stirring occasionally. Your sauce will thicken nicely; and while the figs will be pretty mushy at this point, the sauce will still be quite chunky.

After the sauce has simmered for an hour and thickened, use an immersion blender to blend out most of the chunks.

If you don’t have an immersion blender, any counter-top blender will be fine. You will just need to cool slightly and blend in batches.

You’ll have a nice thick, sauce with only a few small pieces when you are done. This is desirable and gives your sauce an authentic homemade taste and texture!

FAQS about this homemade BBQ sauce:

Read through the following section to get your questions answered – including serving suggestions and a little vegan/fig controversy. You can always skip down to the recipe.

Will the alcohol cook out of the BBQ Sauce?

This sauce simmers for an hour. The alcohol will NOT fully cook out in an hour’s time. There is about 3/4 Tablespoon bourbon in each 1/4 cup serving of this sauce. If this is a concern to you, cover with a lid and simmer longer – about three hours, or use a different recipe. My Healthy Homemade BBQ Sauce does not use any alcohol as an ingredient.

How long will this BBQ sauce keep in the fridge?

Keep it tightly covered in an airtight container, and it will easily keep for a week. If you don’t anticipate using it all in a week, freeze half and save it for another time.

How can I make this sauce a little spicier/hotter?

This BBQ sauce is definitely spiced to be family-friendly, especially if you use the jarred tamed jalapenos as I do. You can always use a regular jalapeno or other pepper of choice. After it’s all been simmered and blended, if you still want more spice, stir in your favorite hot sauce.

Are figs even vegan?

Aaaaand here is the controversy. There are some who do not consider figs vegan and here is why…

Some varieties of figs are only pollinated by a particular wasp that crawls into the fig flower at the end of her life to lay her eggs. She dies in the process and her body is trapped inside the growing fig. As it develops, the fig breaks down and absorbs the dead wasp’s body. You would never see it or know it is there; but yes, you eat it along with the fig. You don’t eat the larvae though. The larvae hatch, crawl out of the fruit and go about their little wasp life until they too are at the end of their life cycle and return to a fig flower to do the same. It’s a symbiotic relationship. The fig would not pollinate without the wasp, and the wasp would not propagate without the fig. It’s a circle of life thing.

So where does that leave a vegan? Well friend, do your own research and come to your own conclusion. If you are unable to eat this sauce, there are lots of other awesome BBQ sauce recipes out there. And peace be with you 💜

I used mine as a sauce on a veggie harvest bowl. (For tips on how to build the best harvest bowl, see below the recipe card.)

You can use this bourbon BBQ sauce in the following recipes:

Use it as a magic sauce to turn your ordinary burger into a gourmet burger! (For tips on how to build the best plant-burger and fries, see below the recipe card.)

And now for the recipe! 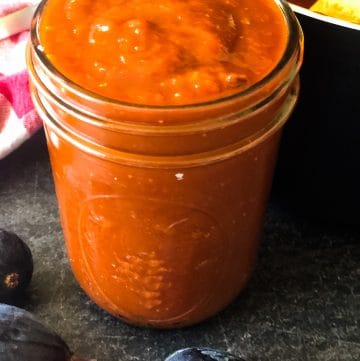 Everybody always asks, so here goes!

A harvest bowl is a Buddha Bowl by any other name! Keep in mind that you will want to use:

For my harvest bowl, I sauteed some asparagus, onion, and mushroom (the green). Microwaved some potatoes from The Little Potato Company (the grain). And cooked up some Adzuki beans and onions in my Instant Pot (the bean). Topped with a drizzle of my newly made Bourbon BBQ sauce and it was a delight!

Today we grilled up some Beyond Burgers. For a whole food plant-based burger, you can try my Sweet Potato Black Bean Burger.

The fries were made by microwaving a white potato for two minutes, then slicing and wedging, sprinkling with Penzey’s Northwoods Seasoning and air frying in my Ninja Foodi.