Made with JUST Egg, hash browns, roasted vegetables, and other tasty vegan ingredients, this plant-based hash brown casserole is perfect for a delicious breakfast bake.

Monday through Friday, breakfast at my house is a fairly “boring” event. Honestly, most mornings we just have steamed veggies (really), air-fried potatoes, with an occasional jar of overnight oats thrown in. On the weekends, however, we like to go all out!

What you will need to make this vegan breakfast bake:

Please see the recipe card below for exact measurements and ingredients used.

For the vegan breakfast meat saute:

For the JUST Egg mixture:

Start by chopping your choice of vegetables into small bite-sized pieces. You will roast all of the vegetables (with the exception of the onion) for about 30 minutes. This will allow the vegetables to soften enough and even start to brown a little.

Next, spread evenly onto a prepared (with cooking spray) cookie sheet or large pan.

You can use a silicone mat or a foil-lined baking sheet. I like to use foil for easy clean-up. You will need to spritz with cooking spray though or the vegetables will stick to the bottom – even with the oil used.

Pull out half-way through and with a spatula or spoon, stir and flip around so that the outer parts that are starting to cook and brown slightly trade places with the inner less-cooked parts. This way everything cooks nice and evenly.

The vegan breakfast meat and onion:

While the vegetables are roasting in the oven, you can prepare the meat/onion mixture.

You will need 1/2 cup of chopped onion and 1/2 cup chopped breakfast meat. Any more than that and the portions are wrong and it is overwhelming in the hash brown casserole.

That ends up being almost one-half a slab of vegan bacon or one vegan sausage.

Which is best in this recipe, vegan bacon or sausage?

I’ve used both and really can’t say which I like better!

Saute in a pan with a little bit of oil for 5-7 minutes or until the onions have softened and the vegan meat is a little crispy. Even though you will add these ingredients to the casserole and cook it in the oven, the onions won’t soften any further nor will the meat crisp more while baking.

While the vegetables are roasting, you should also prepare the JUST Egg mixture. You can use the same bowl you used to mix the vegetables and seasoning together. Mix the JUST Egg, cornstarch, vegan mayo, nutritional yeast, black salt, and shredded cheese together in a medium-sized bowl. Whisk well so that there are no little balls of cornstarch remaining.

Spray a medium-sized casserole dish with cooking spray. I use this 2 1/2 quart classic casserole dish that used to belong to my husband’s grandmother. I’m frankly a little charmed by it. A 9×9 brownie pan or a small cake pan would also work.

Place the roasted vegetables and sauteed meat/onion mixture in the prepared casserole dish.

Pour the JUST Egg mixture on top, ensuring the vegetables are all covered by the mixture.

Place the casserole dish in the 375° heated oven and cook for 35 – 40 minutes. Check after 30 minutes. When the hash brown casserole is fully cooked, the top will be a light golden and when gently pressed, you will be able to see that the casserole is finished. It might be a little creamy but shouldn’t be too runny. It will “harden” slightly on sitting.

And I’ve got answers!

What is JUST Egg? And is it vegan?

JUST Egg is made from mung beans. It tastes, cooks, and scrambles like an egg should.

There is a slight controversy about JUST Egg being vegan. On the JUST Egg website, you won’t find any claims about their product being vegan. They call themselves plant-based. On the label they do disclose that JUST Egg is made in a facility that uses eggs – so if you have an allergy, do be aware.

Perhaps the larger controversy though is that some of the ingredients may have been tested on animals to gain FDA approval. This Reddit post has some good information. Many many products have gone through the same testing requirements.

So… is JUST Egg vegan?

Honestly, the rats weren’t harmed (read the above Reddit post) and they knew they weren’t going to be harmed going into it. Also, if you are an ethical vegan, you can feel good that unlike with chicken eggs, no male baby chicks were killed nor were any egg-laying hens stressed.

There are no animal products in JUST Egg. So read and learn for yourself and make your own choice based on your ethics. But be aware that most of the other vegan products in this recipe or in the vegan dishes you may order in restaurants likely had to go through the same approval process.

What is black salt and do I really need it?

Black salt is not like regular salt. It has a slightly sulfur-like taste and really lends an egg flavor. Black salt might be found in an Indian market, a health food store, or a vegan specialty store. I buy my black salt on Amazon.

Do you have to use black salt? Not really. This hash brown casserole will still taste super yummy without. Using black salt just takes this vegan breakfast bake to a new level of deliciousness. You only ever use a tiny bit and so a small or container will last forever!

What kind of vegan cheese is best?

Yeah…I don’t have a great answer for you. I still haven’t fully made my peace with vegan cheese and frankly, this recipe will be fine without it. Nutritional yeast, which lends a cheesy flavor, is already an ingredient. You will only use a small amount – 1/3 cup. Do not be tempted to use more. Vegan cheese is not the same a dairy cheese and too much will just be….too much. But if you are curious, I use Follow Your Heart shreds and like them best.

Ready for the recipe?

Did you love this recipe? Want to share the love? It would thrill me if you could leave ⭐️ ⭐️ ⭐️ ⭐️ ⭐️ stars and even a comment. Did you know that this will help google to find this recipe when others are looking for something similar? Thanks, Cindy 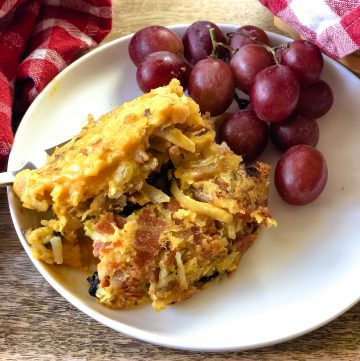