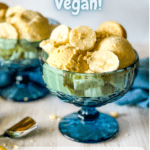 Creamy, smooth, and delicious, this Vegan banana pudding ice cream is made with coconut cream, real bananas, banana pudding mix, and Golden Oreos. Delight your tastebuds with the silky sweet flavor of old-fashioned banana pudding, frozen and served for an elegant vegan ice cream dessert that everyone will remember!

(This recipe was developed for the Ninja Creami Ice Cream Maker. There is nothing like the Ninja Creami for smooth creamy frozen desserts! I have not tried this recipe using anything other than the Ninja Creami, but if you don’t have one and would like to make this to-die-for vegan banana pudding ice cream in a different ice cream maker, see suggestions below at the end of step 2.)

You could say that I’ve been a little obsessed with ice cream and frozen desserts this season! Click here for all of the delicious homemade vegan ice cream recipes, sorbets, and other frozen treats from Veggie Fun Kitchen.

Every summer I go on a quest to make the best vegan ice cream ever! Making vegan homemade ice cream can be a bit of a challenge. It’s often icy, refreezes hard, loses flavor when freezing, and honestly, can be disappointing.

Trust me! You won’t be disappointed with this highly flavorful, smooth, and creamy frozen banana pudding dessert. It’s everything you’ve been hoping for when you bite into that first heavenly taste of delicious banana ice cream!

You can find the exact ingredients with measurements along with more concise directions in the printable recipe card below. Read on for some tips and tricks for making the best vegan banana pudding-flavored ice cream!

Make sure the canned coconut milk is undisturbed for several hours so that the cream has a chance to separate from the coconut water. If you have just purchased your canned coconut milk, then set it in the freezer for 30 minutes to speed up the process.

You can use full-fat or lite coconut milk to skim the cream. You can even use a can labeled “coconut cream” – but you will still need to skim the cream from the top. The higher the fat content, the creamier your vegan homemade ice cream will be. Vegan ice cream tends to get a little icy because it’s not made with dairy heavy cream. Honestly, it’s not as much of a problem when processing your ice cream using the Ninja Creami Ice Cream Maker. So use what you have on hand.

Step 2: Measure out the rest of the ingredients

I measure and mix right into a two-cup liquid measuring cup. This is to ensure that I won’t go over the max line on the Ninja Creami pint freezer container. Measure out the coconut cream first and then add the rest of the ingredients except for the sliced banana.

On top of the coconut cream, measure and add the oat milk (or other plant milk), banana pudding mix, sugar, vegan cream cheese, and vanilla extract to a two-cup measuring cup.

It helps to melt the cream cheese first in the microwave. If you add it straight from the fridge, it is going to be solid and difficult to stir in. Just melt on high for about 20 seconds before adding. It doesn’t need to be perfectly melted and liquidy – just soft enough to easily stir in. If you don’t have vegan cream cheese, you can sub in vegan mayo or even sour cream. Weird huh…you won’t taste the mayo or the sour cream…and it works!

Stir everything together right in the two-cup measuring container. It doesn’t need to be super smooth. If you have a few lumps, the Ninja will take care of that when processing.

Once you have stirred everything together, you can slice your banana and add it to the top. You just need to be careful that you don’t go over the two-cup mark. The Ninja Creami pint container has a max level mark that you must not exceed.

It’s easy to get carried away using that last little bit of banana in a recipe so that you don’t waste any. You won’t be tempted to do that if you keep in mind that you can’t exceed the two-cup mark on your measuring cup. Just smoosh everything down and make sure you aren’t going over the level.

But what if you want to make your banana pudding ice cream in a different ice cream maker? I will just say once again, there is nothing like the Ninja Creami Ice Cream Maker! Nothing! BUT I realize not everyone has one…yet. And you still have that craving for banana-flavored ice cream.

You will need to blend all of the ingredients in your blender until smooth and then process according to the manufacturer’s directions of the ice cream maker you are using. I don’t recommend making this ice cream without an ice cream machine of some sort. It will freeze too solid to use the freezer method.

NOTE: If you are using the Ninja Creami for processing then you don’t need to blend the bananas. The Ninja will take care of that during the processing.

The one and ONLY disadvantage to using the Ninja Creami is that the ingredients need to freeze for 24 hours before processing. So if you had planned on making this ice cream the day of, sorry, you are out of luck. This is why I keep several frozen pints in the freezer at a time so that I can pull one out and process it whenever the ice cream urge hits. You can buy extra Ninja freezer pint containers just for this purpose!

Because I often have several pints in the freezer at a time, I place a piece of tape on the top of the lid and using a sharpie write the recipe name and date, and time I put it in the freezer. My son will be visiting for a while this summer and so I might even write the setting you need to use for processing so that he can pull a pint out of the freezer even if I’m not around.

Has it been 24 hours? Are you ready for ice cream? The following directions are based on my experiences. You should definitely consult the manufacturer’s directions in the owner’s manual that came with your Ninja Creami.

The first time you process using the Creami, you should watch the video recommended by Ninja. It will get easier the more you do it. Here is a recap:

Now it’s time for the add-in Oreo Cookies. To give this ice cream recipe an authentic banana pudding vibe, I wanted to add in crushed vanilla wafers -because that’s how my grandma used to make her banana pudding.

As discussed above in the ingredients section, vanilla wafers are not vegan – unless you are able to find an off-brand that is. Oreo cookies however are! (Unless you are concerned about the unknown sugar source, in that case, this recipe is not for you.)

Crush the Golden Oreo cookies with a rolling pin. You don’t have to crush the cookies into tiny crumbs. In fact, it would be better to leave some chunks. This recipe calls for three oreo cookies which will go into the ice cream. Go ahead and crush another one or two to use as a topping.

Make a hole in the center of your frozen and processed ice cream pint. Add the cookie crumbs, reinsert the pint, and process according to the ice cream maker’s instructions using the “mix-in” setting.

For some other delicious vegan ice cream and other frozen treats from Veggie Fun Kitchen, try: 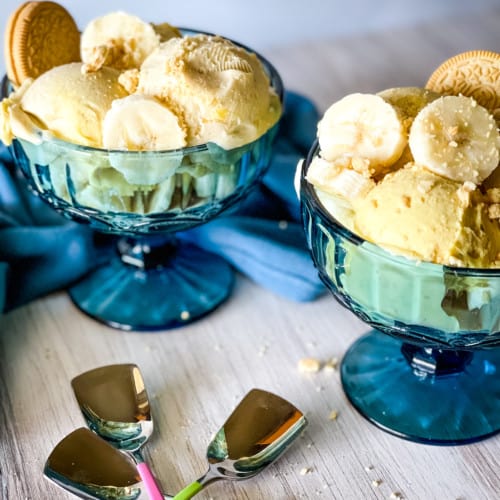 This recipe was developed for the Ninja Creami Ice Cream Machine. There is nothing like the Ninja Creami for smooth creamy frozen desserts. If you process using another ice cream maker then blend everything up – except for the Golden Oreo cookies. Process according to your manufacturer’s directions and then add the crumbled Oreos at the end of the processing.   The serving size is one measly half cup. Adjust the nutrition information if your portions are larger. Also, if you are feeding more than one or two people, consider making two batches! You’ll thank me later:)