5 from 5 votes
Jump to Recipe 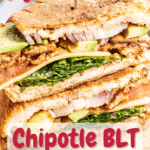 This flavorful vegan panini cooks up crisp and chewy served on a crusty bun, with chipotle mayo, vegan cheese, and vegan bacon for a tasty satisfying vegan BLT sandwich that is easy to make using your panini grill, skillet, or griddle.

Sometimes I really get the craving for a good vegan sandwich! You know, the one with layers of flavor and texture all wrapped up between two glorious bookends of satisfying, carby, comforting bread…am I right? This BLT vegan panini does just that!

Today I used tempeh bacon by Lite Life. I also really like the seitan Lite Life bacon or Upton’s seitan bacon. There are so many options for us nowadays! You might also want to try one of these recipes I found for vegan bacon. I have not personally used any of them except for my super tasty tofu bacon bits.

I have not seen vegan chipotle mayo at my local grocery stores. You might be able to find it at yours. You can use regular unseasoned vegan mayonnaise if you prefer. Or you can make one of these quick and easy recipes:

Another option if you are trying to eat oil-free and would rather not use an oil-based mayo spread is to use mashed avocado and sprinkle a little chipotle seasoning on top if you still want the spicy chipotle flavor. I would definitely leave out the sliced avocado if I used mashed avocado for the spread though.

How to make the perfect BLT vegan panini sandwich

Step 1: prep and source your ingredients

If you need to make the vegan bacon or chipotle mayo then make them ahead of time. The time to prepare these ingredients is not included in the prep time in the recipe card below.

If you are using store-bought vegan bacon then cook it according to package directions. Be careful to not overcook the vegan bacon. It tends to get super crispy and hard super fast if you aren’t paying attention.

Slice the onion, wash the spinach if not already washed, and peel and slice the avocado. Set everything aside so that you can quickly and easily assemble your panini sandwich when it is time.

Preheat the skillet, griddle, or panini press you are using, and get ready to cook your BLT panini!

Spread the chipotle mayonnaise on the insides of each half of the buns. On the bottom buns, layer first with the vegan bacon. Continue to layer with the tomato, spinach, vegan provolone, red onion, and avocado. Press the top bun down and smoosh a little bit to try to keep everything together.

Even though my panini press is non-stick, I still like the texture of my grilled panini to be cooked with a little bit of fat. It just comes out nice and crispy that way. You can also use a little (optional) olive oil or vegan butter for flavor.

Place the veggie panini sandwiches on the cooking surface, cooking in batches if necessary. My panini grill is too small to cook both sandwiches at once.

Every panini press cooks differently though. You will be cooking your panini sandwich for 2-5 minutes if you are using a panini maker. Watch it carefully the first time making it so that it doesn’t burn.

Time the same amount per side if using a griddle or skillet. You should place something heavy – such as another pan – on the top of the sandwiches while they are cooking.

Be aware that depending on the vegan cheese you use, it may or may not get melty. Vegan cheese is like that…

This grilled BLT panini recipe honestly makes a complete meal. It is also perfectly served with a tasty soup or salad. I have some delish soup and salad suggestions you can serve with your vegan BLT sandwiches:

Looking for some more tasty vegan grilled sandwiches? These are my favorites! 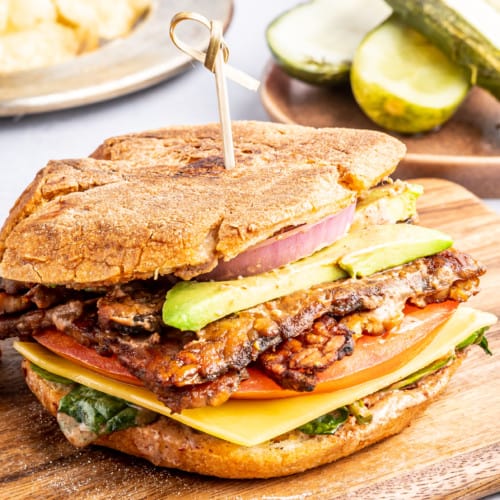 Use any vegan bacon of your choice. I like to use seitan, tofu, or tempeh. See the blog post for some other fun picks for vegan bacon. If you can find smoked provolone cheese, the flavor combo is amazing. I like to use Violife. Otherwise any vegan cheese you can get.  You can make your own vegan chipotle mayonnaise by following the directions for this recipe for the Best Chipotle Mayo from Feasting at Home substituting vegan mayo for regular mayo. Or this recipe for Vegan Chilple Mayo from A Plantiful Path which can be made with cashew tofu mayo. OR simply add chipotle seasonings t(o taste) to some vegan mayo along with a squeeze of fresh lime.