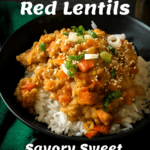 These deliciously flavored red lentils made in the Instant Pot will remind you of the flavors of a Korean BBQ. They are (mostly) oil-free, processed sugar-free, and spiced just right. Make them easily in your pressure cooker and serve over rice, vegetables, or roasted potatoes for a flavorful, healthy, plant-based dish.

Are these the best tasting red lentils you’ll find? I think so. Are they authentic Korean food? No way! But the flavors are similar to what we used to whip up for Korean BBQ sauce when we cooked in a slow cooker – again, not at all authentic – but I did want to give you an idea about the savory/sweet Asian-inspired flavor explosion you’re about to experience with this very plant-based red lentil dish.

For more flavorful healthy plant-based Instant Pot recipes, try one of these:

To make these Korean-inspired red lentils in the Instant Pot, you will need:

For the sauce you will need:

And then to top it off:

How to make the perfect Instant Pot red lentils:

It’s so easy! Just start by mixing up the sauce and set aside. Then chop your vegetables and also set aside. You’ll want to keep the chopped onions separate because you will saute them first before adding the other ingredients.

Finally, rinse and pick through the dried red lentils, just to make sure there aren’t any weird pieces, or tiny stones.

Remember that unlike brown or green lentils, cooked red lentils will not be firm but rather a soft “mushy” texture.

Start cooking in the Instant Pot

Once you have all of the prep work done you can start cooking in your pressure cooker. The hard work is done and it will be a snap!

To make this dish “almost” oil-free, I saute the onion for a few minutes in vegetable broth – not oil. You are sauteing for only a few minutes. The goal is to barely soften the onion – not cook it. That’s the job of the Instant Pot.

Stir the whole time and watch the bottom of your pot so that you don’t get any brown spots. If you do, it might cause this recipe to NOT come to pressure. Boo…sad face…

If you do have brown spots then simply “deglaze” the bottom of your pot by adding a little extra liquid and scraping the bottom of the pot. It should come clean.

Next, add all of the other ingredients (except for the toppings). The liquid should pretty much cover everything with the exception of a few vegetables poking their heads up. Give it a stir.

Make sure to follow the manufacturer’s directions for your particular pressure cooker. Things change all the time with the new models and I’m unable to keep up. Using the manual setting, set your pot for three minutes on high. Shocking – but three minutes is enough!

It will take about 7-10 minutes to come to pressure before it starts the countdown. Once it has finished cooking at pressure for 3 minutes, carefully do a quick release and open the lid once the pressure has fully released.

Your red lentils will be nice and soft (mushy), like red lentils should be. Your house will smell amazing and I hope you are ready to eat!

This dish will generously serve four people. If you want to save it for later, it will keep in the fridge for about five days.

Serve over rice, vegetables or potatoes. My personal favorite is steamed riced cauliflower.

The printable recipe card for red lentils in the Instant Pot 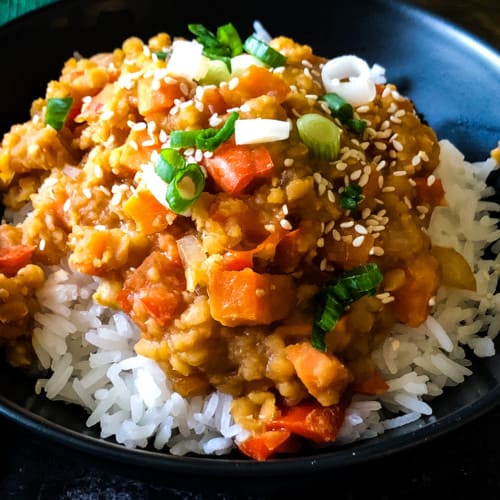 The Vegetables and the Lentils

For this recipe, I used a 6 quart Instant Pot. This should also work in the larger and smaller sizes. Time coming to pressure might be different.  The saute time is included in the prep time. The time coming to pressure is included in the total minutes. If you are trying to eat oil-free you can leave out the sesame oil or cut it down to 1/2 teaspoon.  Be aware though that sesame oil is an important flavor element to this dish and it will affect the flavor. It will still be tasty – just not AS tasty. I personally cut it down to 1/2 teaspoon when I cook it for myself because I am trying to be a healthier vegan:) Serving Suggestions: The following are suggestions and not included in the nutritional information. Spoon over: Keep any leftovers in a tightly closed container in your refrigerator for up to 5 days.