5 from 1 vote
Jump to Recipe 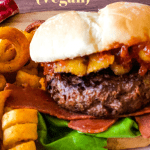 This Hawaiian Burger is a veganized version of the recipe 50 Ways to Leave Your Guava from the Bob’s Burgers Burger Book.

Layered with guava bbq sauce, vegan bacon and burger, a grilled pineapple slice, and fresh lettuce; it’s just like you might find at Bob’s Burgers – only veganized.

What is “Bob’s Burgers”?

This vegan burger recipe with pineapple, guava bbq sauce, and (vegan) bacon, was adapted from the cookbook “The Bob’s Burgers Burger Book: Real Recipes for Joke Burgers” written by Loren Bouchard and available on Amazon.

You don’t know what Bob’s Burger is, you say? Bob’s Burgers is a long-running P-13ish family sitcom cartoon that currently runs on the FOX network, can be watched on Adult Swim, and Hulu.

The show is about Bob and his family who run a burger joint (Bob’s Burgers) which features some pretty unique burger combinations – a different one of which is featured each day on the “burger of the day” marquee.

The Bob’s Burgers Burger Book includes recipes for around 70 of these one-of-a-kind burgers along with notes naming the episode the burger was featured on.

To make this vegan burger recipe, you will need:

(There is a handy printable recipe card below if you continue scrolling. On this recipe card, you will find exact measurements and directions. Please read through the following sections to learn more about Bob’s Burgers and tips for making this Hawaiian Burger – vegan style.

Nope, they sure aren’t! But that doesn’t mean that we plant-eaters can’t make them vegan:) In fact, I think this book was given to my family a few years ago as a joke – sure, let’s give a burger book to a vegan family... As you can imagine, veganizing a recipe never been a problem in my kitchen!

How to Make this Vegan Burger with Pineapple and Guava Sauce

The fun thing about this burger is the cacophony of intense flavors that just really go together well.

Start by cooking up your plant-based vegan burger of choice and your vegan bacon.

While the burgers, bacon, and pineapple are cooking you should get your sauce together. Just add all ingredients and stir over medium heat till the guava jelly or jam melts and blends in.

Will the alcohol cook out?

You are only using 1/4 cup of rum in this sauce for four people – so one Tablespoon per person. If this is a concern, then replace the rum with a little veggie broth.

Putting your Hawaiian Burger together:

Just a little fun fact about this Bob’s Burgers episode:

The Bob’s Burgers Book has about 70 pretty unique burger recipes; and many of them can be adapted to be vegan friendly! Each burger is based on an episode of Bob’s Burgers and is featured on the daily specials marquee in the show. This particular burger is called “50 Ways to Leave Your Guava Burger” and is seen on season 3 episode 10 in which Bob’s wife (Linda) tries desperately to have a bonding session with her daughter Louise. It…doesn’t go well. Enjoy this little preview here:

And now for the recipe: 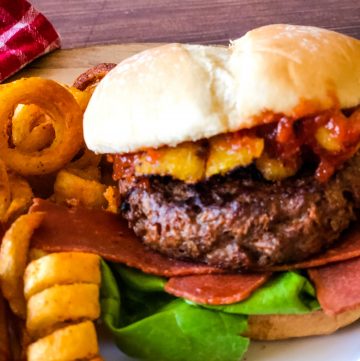